SEOUL, Nov. 8 (Yonhap) -- Joe Biden's election as U.S. president is likely to keep the South Korean currency strong against the U.S. greenback for a while, which will work to trigger foreign capital inflow to the local stock markets, analysts said Sunday.

The local currency closed at 1,120.4 won against the U.S. dollar Monday, up 7.8 won from the previous session's close and the strongest in 21 months.

Analysts said Biden's election victory could further push up the Korean won down the road, as the president-elect has supported large-scale fiscal spending and stimulus policies that would weaken the U.S. dollar.

The strong won against the greenback would re-direct the FX-sensitive global passive funds to the local markets, analysts noted. 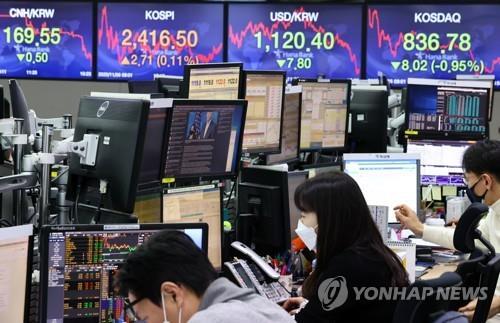 "So far, the COVID-19 uncertainties and the Trump Administration's (economic) unilateralism and protectionism have kept the foreign cash within the U.S. territory despite the weak dollar, but the U.S. election results will help clear such obstacles one by one," he said.

The local stock market responded fast to the combination of a Joe Biden presidency and a Republican-dominated Senate.

Analysts also predicted Biden would not be able to toughen antitrust regulations against big tech firms, due to the opposition from the Republican-controlled Senate.