SEOUL, Nov. 9 (Yonhap) -- The defense ministry vowed Monday to continue to work closely with the United States under the incoming Biden administration to maintain a firm combined readiness posture for peace on the Korean Peninsula.

"The South Korean and the U.S. defense authorities will strive for maintaining a strong combined defense posture to militarily support the peace process on the Korean Peninsula," ministry spokesperson Col. Moon Hong-sik told a regular briefing.

After setting up a task force led by Vice Defense Minister Park Jae-min, the ministry has been reviewing policy measures to be fully prepared for possible changes to defense issues between the two sides, Moon added.

Key issues include the envisioned transfer of the wartime operational control (OPCON) of South Korean troops from Washington to Seoul, and the possible adjustment of the troop level stationed in South Korea, though the two sides have said the matter has not been officially discussed.

Defense Minister Suh Wook said the new U.S. administration could demand a smaller raise in Seoul's payment for the upkeep of American troops in South Korea than the Trump administration did, though Seoul's overall payment will likely have to increase from previous years.

On North Korea, Suh said Washington's policy is expected to shift to a bottom-up approach based on Biden's pledge to pursue a "principled diplomacy" toward the North.

Suh, however, doubted that Biden would repeat the Obama administration's "strategic patience" policy of applying pressure while waiting for the North to return to the negotiating table.

"They would have had sort of a self-reflection on the policy, and my personal assessment is that they would opt for an evolved form of pressure with sanctions on the North and diplomatic engagement," Suh said during a parliamentary session.

North Korea, in the meantime, has not shown any unusual military moves up until now, the Joint Chiefs of Staff (JCS) said, amid speculation that the communist country could take provocative moves, such as missile launches, given its track record of being provocative when a new U.S. government takes office.

North Korea has not made any official response to the U.S. election result. 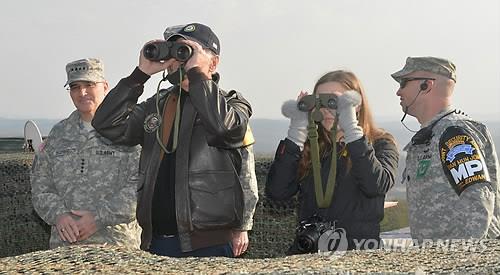