The Seoul Western District Court on Sunday issued an arrest warrant for a 25-year-old man, whose name and nationality have not been disclosed, on charges of posting threats against the diplomatic mission, according to police. An arrest warrant for an accomplice, also 25 years old, was issued the day before.

The two are accused of posting five flyers, which carried messages such as "Do not ignore Muslims," "Do not destroy our religion" and "Those who point knife at us will be killed by the knife," on the embassy wall in central Seoul on Nov. 1.

One of the flyers had a picture of French President Emmanuel Macron with a red X mark over it, according to police. 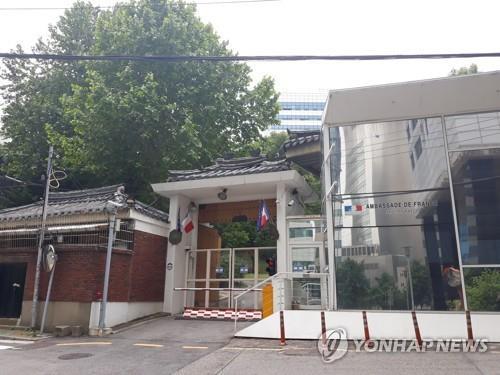 The court allowed police to put the suspects in custody, citing the gravity of the case and flight risk as unregistered foreign nationals.

"(The police) are investigating the relationship between the two suspects, their motives and possible connection to terrorism," Seoul Metropolitan Police Agency chief Jang Ha-yeon said. Jang said the police are reviewing the security conditions of other foreign missions in the capital.