"I am confident that this would not only restore the United States' international leadership but also, with the close cooperation with the UN system, reinforce multilateralism that has been undermined over the past several years," he said in the letter released by the Ban Ki Moon Foundation on Monday.

He was referring to Biden's promise to return the U.S. to the Paris Climate Change Agreement, a multilateral framework on tackling global warming, from which the U.S. withdrew early this month under the Donald Trump administration.

Ban added that he "wholeheartedly welcomes" his promise on the Paris agreement.

On the bilateral alliance between South Korea and the U.S., Ban expressed hope for the alliance to deepen under Biden's leadership.

"The ROK-US alliance is far more than partnership or friendship. A military alliance forged in the crucible of war and hardened by blood spilled together has now advanced into a comprehensive alliance of shared values," he said.

"I sincerely hope it matures and becomes consolidated even further under your leadership." 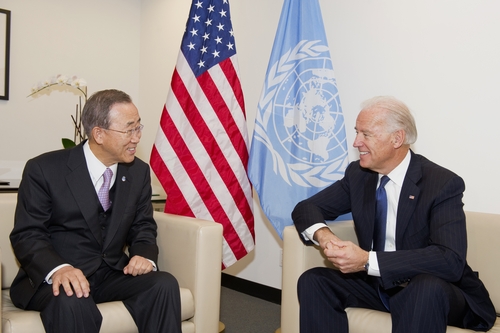