The Gangwon Provincial Police Agency also announced its arrests of two South Korean brokers -- identified only as female real estate agents aged 51 and 61 -- on charges of providing counterfeit documents for use in applications by the 77 migrant workers.

The two brokers and 77 foreigners were all referred to the prosecution for indictment on charges of forgery of private documents and violation of the Immigration Control Act, the police agency said. 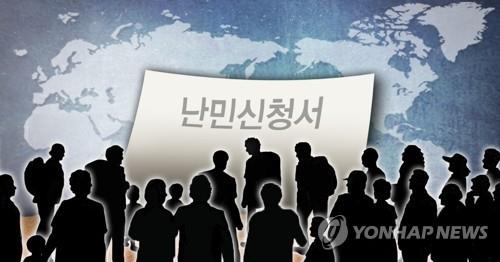 The brokers are accused of providing forged house rent contracts to foreigners who entered Korea without a visa or illegal stayers from September 2017 to August 2018 in return for accepting 500,000 won (US$450) to 2 million won.

The 77 foreigners, most of whom were working at local farms, shipyards and factories, submitted asylum applications to local immigration offices based on the forged documents before being granted the G-1 humanitarian status visa to stay here legally.

They were also able to remain in Korea for about two more years and earn money by launching appeals proceedings after their applications for recognition of refugee status were rejected.

Under the current law, foreigners who enter Korea without a visa cannot engage in employment activities and must leave the country when the 90-day period of stay expires.

The Gangwon police agency said its investigators have detained all the foreign and Korean suspects after tracking them down in 36 cities nationwide from November last year to October this year, adding a manhunt is under way for other suspected brokers.

The agency said it will continue to crack down on various crimes by asylum applicants.

According to government data, the cumulative number of asylum applications filed in South Korea topped 70,000 as of August this year, with the monthly number of applications averaging about 1,000 in the January-April period.