SEOUL, Nov. 9 (Yonhap) -- Unification Minister Lee In-young called for North Korea on Monday to act in a "discreet, wise and flexible" manner and refrain from provocations during the U.S. leadership transition so as to keep chances of progress in nuclear negotiations alive.

During a press meeting held at the ministry's inter-Korean dialogue office in Seoul, Lee also urged the North to carry out existing peace deals concluded with the United States and the South and demonstrate its denuclearization commitment to move the stalled peace process forward.

The remarks came amid heightening uncertainty over U.S. policy on the North in the wake of Joe Biden's election as U.S. president as well as concern that Pyongyang could carry out provocations to test the incoming administration.

"The U.S. presidential election was held a few days ago, which represented a major turning point in a large change in situations," Lee told reporters. "I hope that the North will take a discreet, wise and flexible approach amid this period of transition."

"Should North Korea faithfully carry out agreements with the South and the U.S. and demonstrate a forward-looking attitude in denuclearization, it could not only move forward peace on the Korean Peninsula but also expand peace space between the two Koreas," he added.

Lee said the South will do its best to maintain close coordination with the incoming U.S. administration through various channels to try to convince Washington of the need for cooperation with the North to help build a lasting peace on the Korean Peninsula. 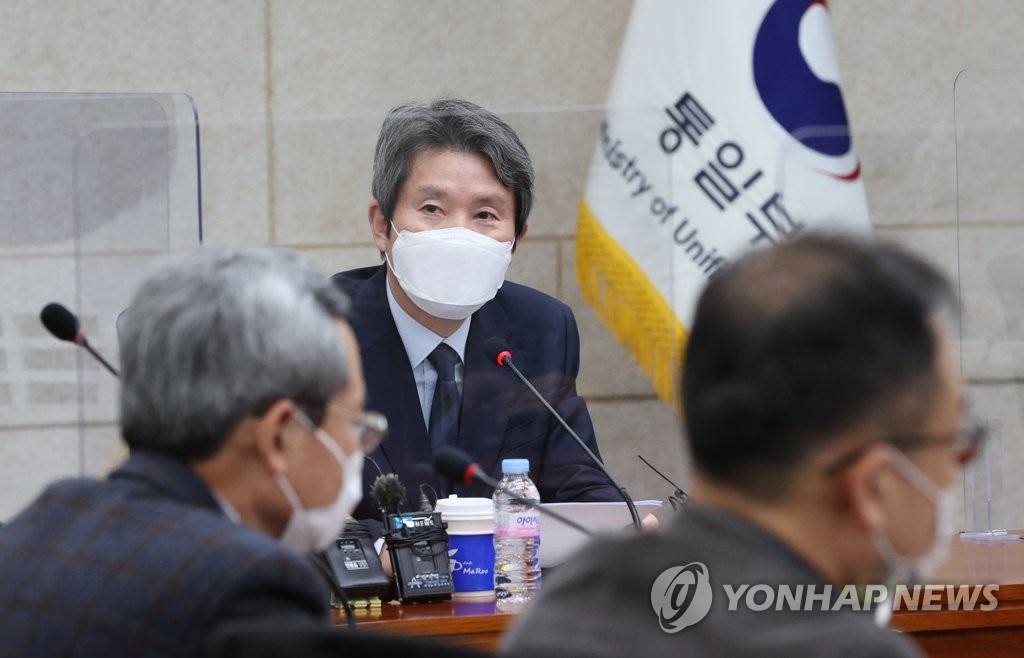 Nuclear talks between North Korea and the U.S. have stalled since a no-deal summit between North Korean leader Kim Jong-un and U.S. President Donald Trump in Hanoi early last year. The two failed to meet halfway in how much Washington eases its sanctions in exchange for Pyongyang's denuclearization steps.

Biden's "principled" diplomacy on North Korea is also cited as a reason for the possibility of a further deadlock in nuclear talks, which experts worried could make it harder for Seoul to pursue many of its envisioned cooperative and cross-border projects.

Some speculate that the North could carry out provocations to strengthen its negotiating hand before coming out for talks.

South Korea has, for its part, sought to expand cross-border exchanges to create a mood for peace and help facilitate the long-stalled nuclear talks. The efforts, however, have been hamstrung by Washington's worries that it could undercut the global sanctions regime before the North's denuclearization.

The minister said that South Korea will make the most of the transition period in Washington to convey its positions on North Korea through "various channels" and work hard to get Washington to engage with the North.

"Historically, the U.S. has listened closely to South Korea's positions. It is also true that the U.S.' engagement policy toward North Korea has to some extent been affected by (our) inter-Korean policy trend," Lee said.

"We will use (the transition period) as a chance to solidify the foundation for cooperation between South Korea and the U.S. and support for the Korean Peninsula peace process. I really hope that President-elect Biden will become a wise man for peace and come as a good friend for Korean people," he added.

Meanwhile, a high-ranking unification ministry official who attended the press meeting noted that Biden's emphasis on respecting the alliance with South Korea and his push for a "bottom-up" approach in handling North Korea issues could provide "more room" for Seoul to get its views reflected in Washington's North Korea policy.

"We believe that chances are quite high for (better) coordination and sharing in terms of Korean Peninsula policy and our peace process when the U.S. government takes office," he said.