SEOUL, Nov. 10 (Yonhap) -- It wasn't yet supposed to be a desperate moment on Monday, but KT Wiz manager Lee Kang-chul went for a desperate measure against the Doosan Bears.

The strategy blew up in his face, though, and the Wiz lost to the Bears 3-2 in Game 1 of their best-of-five playoff series in the Korea Baseball Organization (KBO). 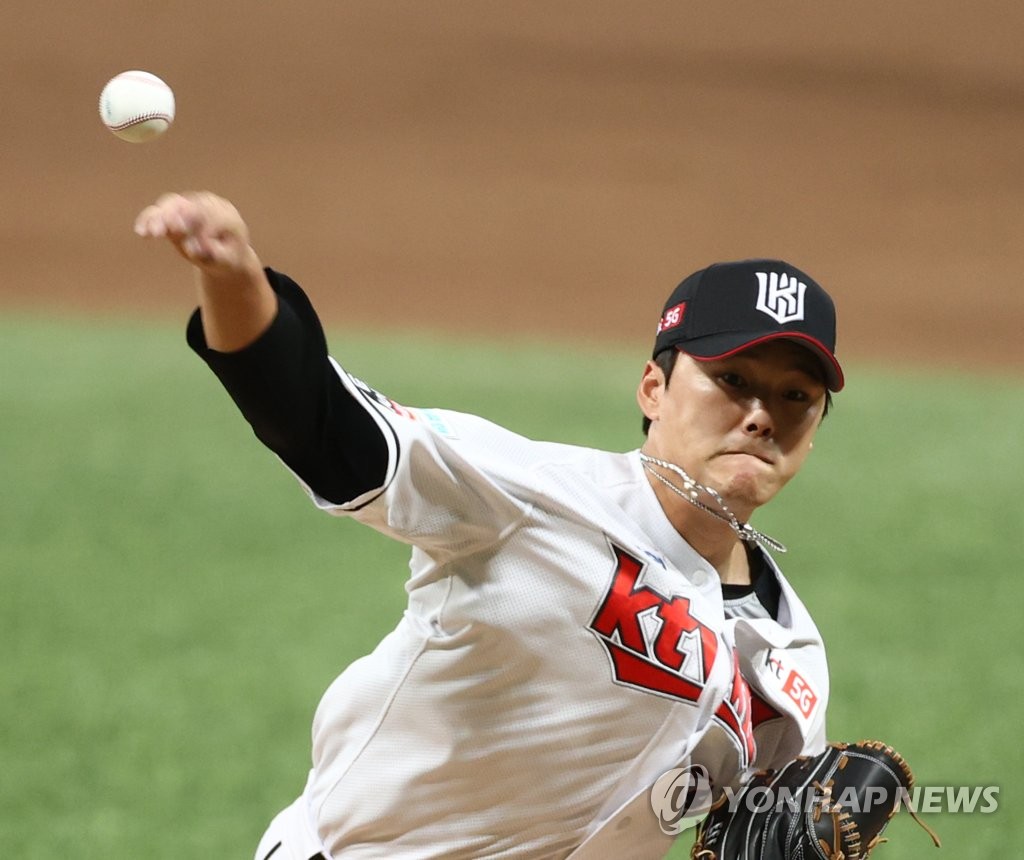 To begin the top of the eighth inning, Lee summoned his usual starter, William Cuevas, out of the bullpen. The game was still scoreless.

Before the game, Lee surprised many by declaring that Cuevas, expected to be Game 3 starter in this best-of-five series, would be available in the bullpen for Game 1. Lee said Cuevas would most likely go in to protect a late lead, and that he would start a new inning without any runner on base.

Instead of trying to keep the Wiz ahead, Cuevas was brought in to preserve a tie game and give his offense a chance to score later.

Right-hander Ju Kwon got out of a two-out, two-on jam in the seventh, after taking over from starter So Hyeong-jun, who was dazzling for 6 2/3 shutout innings in his postseason debut at age 19.

Ju led the Wiz relievers in regular season appearances (77) and innings pitched (70), but he was only allowed to retire one batter.

And Lee's plan to lean on Cuevas to keep the game tied in the eighth went awry almost immediately. Cuevas hit the first batter he faced, and a sacrifice bunt put the runner at second. A hard line drive by Jose Miguel Fernandez followed, with first baseman Kang Baek-ho well positioned to make the difficult grab.

The next batter, Oh Jae-il, poked a grounder through the left side, and shortstop Shim Woo-jun barely kept it in the infield to keep the lead runner at third.

Just like that, Cuevas was gone after 11 pitches against four batters. 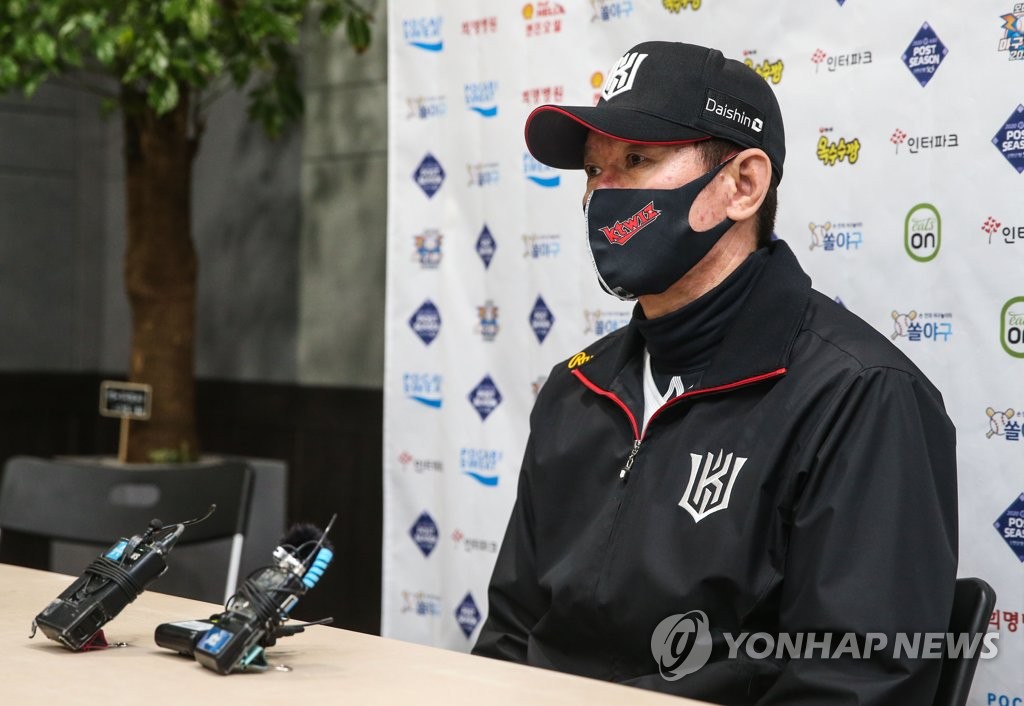 Closer Kim Jae-yoon came on and gave up two straight singles that put the Bears up 2-0. The Wiz tied the score in the bottom eighth, but a new reliever, Jo Hyun-woo, gave up a go-ahead single to pinch hitter Kim In-tae in the top ninth.

That was the final blow to the Wiz bullpen that will have to recover quickly, or they could be in for a short series.

By using Cuevas in relief, Lee Kang-chul left himself open to second-guessing by armchair managers. His explanation for the decision after the game was even more of a headscratcher.

"I felt our Korean pitchers would get too nervous, and that's why I used Cuevas (ahead of others)," Lee said. "We did the best we could, using the data that we had."

The manager clearly can't trust his homegrown arms in a postseason game, and the one foreign pitcher that he did trust, Cuevas, looked rattled in his first bullpen outing of the year, too.

He hit Choi Joo-hwan when he was ahead 1-2 in the count. On the line drive and the infield single that came later in the inning, Cuevas was bailed out by his defense, or things could have unraveled before the next pitcher was properly warmed up. 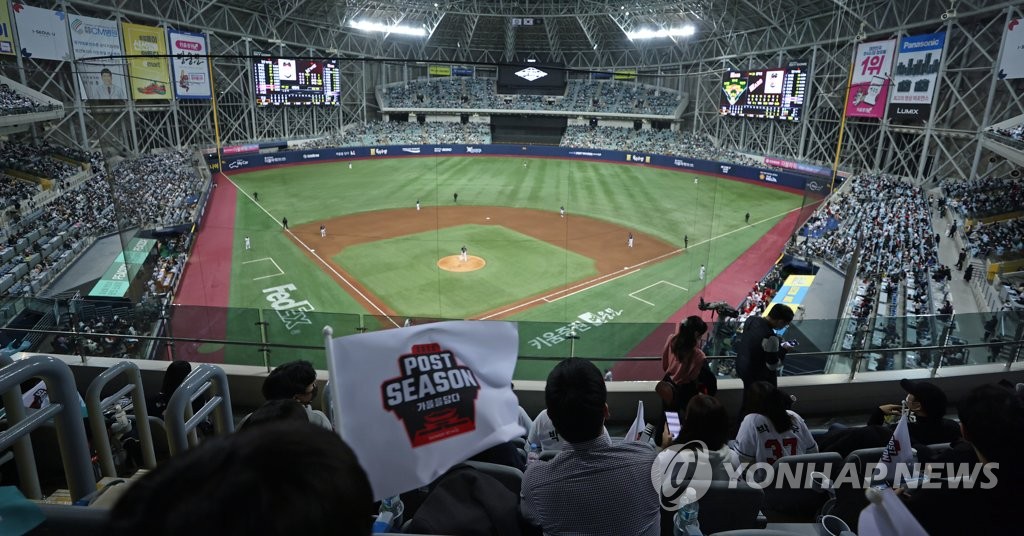 That Cuevas made only 11 pitches may be the one saving grace from this messy bullpen performance. He should still be ready for a Game 3 start on Thursday.

The Wiz had the fourth-best bullpen ERA during the regular season at 4.54. They ranked eighth (5.10) in the first half but ranked second (4.01) in the second half.

But their relievers also struck out the fewest batters with 848. Kim Jae-yoon had a decent strikeout rate, with 58 Ks in 60 2/3 innings, but other relievers lack putaway stuff.

As a staff, the Wiz ranked last in the KBO with a 14.9 percent strikeout rate (strikeouts divided by batters faced), well below the league average of 17.4 percent. The bullpen came in last in the whiff rate (swinging strikes per swing) with 18.4 percent, 2.5 percentage points below the KBO average.

With professional hitters up and down their lineup and speedy pinch-running options on their bench, the Bears will make opponents pay for pitching to contact.

Can any KT reliever pitch through postseason jitters? The answer to that question will likely determine the outcome of this series.