Hyundai Motor plans to produce the 2022 Tucson gasoline and gasoline hybrid models in the Alabama plant next year for the sale of the compact SUV in the U.S. market starting early next year, the company said in a statement.

The Tucson with a gasoline and a gasoline hybrid engine will also be manufactured in Hyundai's main Ulsan plant in South Korea. The 2022 Tucson plug-in hybrid model will be assembled in South Korea and shipped to the U.S. for local sales, it said. 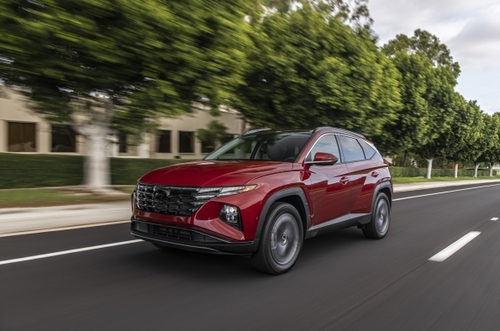 Hyundai plans to launch 12 SUV models, including the Tucson, Santa Fe, Kona and Santa Cruz, with combustion engines or environment friendly ones, in the world's most important automobile market in the next 15 months.

The upcoming SUV models include the Tucson N Line model, which was unveiled in the U.S. on Tuesday.

Hyundai currently sells the Veloster N, i30 N and i30 Fastback N, as well as the Avante N Line and the Kona N Line in select markets.

From January to September, Hyundai's U.S. sales fell 11 percent to 500,820 vehicles from 563,450 units in the year-ago period. Sales results of its independent Genesis brand have yet to be released.