"I use them twice a week to get to the station. It saves time by about half," the 43-year-old American said, asking to be only identified by his first name. "I don't have to worry about catching COVID from using a bus and it's so fun."

The popularity of e-scooters has grown sharply in South Korea, now home to 52,080 units nationwide as of end-August, a big jump from 17,130 tallied at the end of last year, according to joint research by Seoul city, the Korea Startup Forum and the Shared Personal Mobility Alliance (SPMA).

The coronavirus impact also played a part in its rapid growth, as people like Wendell have increasingly shunned public transport. Between March and August, the cumulative e-scooter usage via mobile apps was recorded at 15.2 million cases, 4.3 times higher than 3.5 million counted for the July-December period of last year.

But safety concerns about the vehicles are also growing, as seen in their notorious nickname "Kick-rani," a combination of the word kickboard and "gorani" -- a water deer in Korean -- that likens them to the wild animal that pops up out of nowhere on the road.

Lee Na-hyun, a mother of two kids in their early teens who lives in Seoul's southern Daechi district, was standing at an intersection the other day when she saw two teenagers riding an electric scooter together across the street suddenly crash to the ground, rolling on top of each other for about a meter or two.

"They looked older than my kids. It happened in a flash and still gives me shivers thinking what if that happened to my kids," she said. 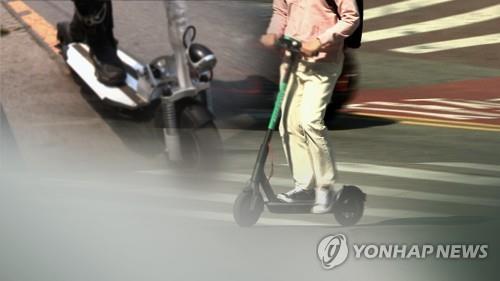 Lee said she already sees so many people, including teenagers, weave in and out of pedestrians on sidewalks, in pairs and without helmets.

"It's hard to believe that no one is doing anything about that. Most people don't even know what's legally right and wrong because the rules are not strong enough," she said.

There are no specific regulations yet regarding two people riding a single e-scooter. And the penalty for not wearing a helmet in Korea is 20,000 won (US$18).

Amid growing calls for a legal overhaul, lawmakers revised the law in May in an effort to reflect growing demand for allowing e-scooters on cycling paths to reduce risks from crashing with other vehicles on the road.

The revision, however, has stirred public outcry, sparking calls for stricter rules.

"We're going to see middle school first years racing down the street with no helmets," Kim Pil-soo, an automotive technology professor at Daelim University College, said. "The lawmakers are so idle to think that they could just move them to the bike list and squash rules into the existing mold of laws."

On the presidential office Cheong Wa Dae's popular online petition site, over a dozen petitions, with nearly 25,000 signatures altogether, were posted in a row in recent weeks raising serious concerns about the eased regulations

"This pathetic law that apparently aims for fast adoption of e-scooters is nothing but a law saying that we're going to scatter time bombs all over the streets," one petition read.

"Has anyone been on an e-scooter at 25 kph? It runs at an enormous speed as it accelerates ... Are we really going to let our children ride that dangerous thing?" another petitioner said in a separate post.

Lawmakers have said that safety regulations will be addressed through fresh legislation in the near future. 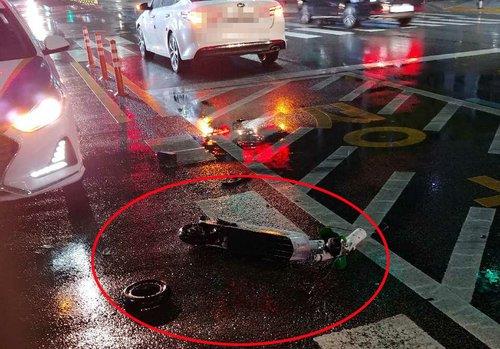 Data by the Samsung Traffic Safety Research (STSR) shows that e-scooter-related accidents surged to 890 in 2019 from 49 in 2016. According to the Seoul city government, two-thirds of the cycling paths in Seoul are dually used as walking trails.

"There will be bike riders, e-scooter riders, joggers and people taking a stroll crowding on cycling paths, and more accidents, until a serious one happens and gives policymakers a wake-up call," Chung In-jee, a 36-year-old office worker living in Gangnam, said.

Professor Kim stressed that the law should be made based on what's happening in reality.

"We don't need 'e-scooter squads' to catch lawbreakers and slap fines. That would be too unrealistic. We could instead let people ride on sidewalks, for example, but make them face heavier responsibility in case of an accident," he said.

Kim also called for a new law covering all types of new mobility devices, from two-wheeled transporters like Segways to electric unicycles that come without handles, for comprehensive management.

Jeon Jeho, a senior researcher at STSR, suggested banning teenagers under age 18 from riding e-scooters until a new law is made, similar to a policy Lime has adopted, or blocking their use only at night.

"It's something that needs the whole industry to get together, even for the time being, if they really want to contribute and don't want their image to be tainted at the budding stage," he said.

As an individual, Wendell said he has a certain set of rules of his own for safety.

"I avoid the peak time of 7-9 a.m. I have my very own specific paths and streets that I use. I always take the same roads because there are so many bumpy paths. I'm 200 percent alert." 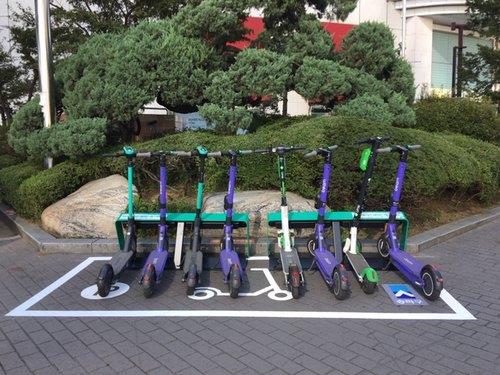