SEOUL, Nov. 10 (Yonhap) -- The South Korean stock market extended its winning streak to a seventh session on Tuesday, as investor appetite for risk strengthened over better-than-expected efficacy of a COVID-19 vaccine by U.S. pharmaceutical giant Pfizer. The Korean won fell against the U.S. dollar.

Trading volume was moderate at about 1.4 billion shares worth some 17.7 trillion won (US$15.9 billion), with gainers outnumbering losers 546 to 297. 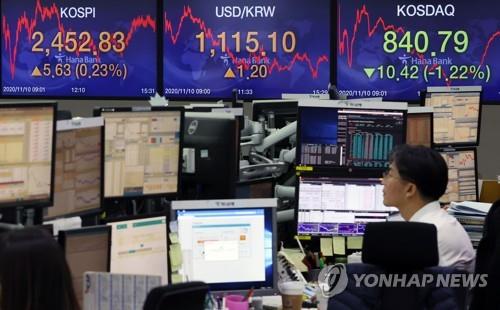 Index rebounded to close at an over 2-year high, marked by strong advances by travel and fuel stocks that followed Pfizer's vaccine test results. Contact-free tech, chemical and pharmaceutical stocks slumped, after having soared amid the global COVID-19 resurgence.

Local stocks were affected by U.S. top infectious disease expert Anthony Fauci's statement that the Pfizer vaccine shot will have a "major impact," fueling investor optimism that the vaccine could be deployed by the end of the year.

The local currency closed at 1,115.1 won per dollar, down 1.2 won from the previous session's close.

Bond prices, which move inversely to yields, closed lower. The yield on three-year Treasurys rose 1.7 basis points to 0.976 percent, and the return on the benchmark five-year government bond added 3.4 basis points to 1.306 percent.