SEOUL, Nov. 10 (Yonhap) -- Jeju Air Co., South Korea's biggest low-cost carrier, said Tuesday its net losses widened in the third quarter from a year earlier due to the impact of COVID-19 pandemic on the airline industry.

Net losses deepened to 66.8 billion won (US$60 million) in the three months that ended in September from 30.14 billion won in the same period of last year, the company said in a statement.

"Suspended flights on profitable international routes amid the pandemic continued to weigh on the quarterly results," a company spokesman said.

Operating losses also widened to 70.06 billion won in the third quarter from 17.36 billion won a year ago. Sales plunged 83 percent to 59.55 billion won from 368.77 billion won during the same period, it said.

Jeju Air has suspended most of its 76 international routes since March as countries strengthened entry restrictions to stem the spread of the COVID-19 pandemic.

As of Tuesday, four international routes from Incheon to Weihai, Osaka, Manila and Harbin and nine domestic routes are available.

The budget carrier plans to provide one flight a week on the route from Incheon to Tokyo beginning on Nov. 21, resuming the route service after three months.

It halted the Incheon-Tokyo route in August as travel demand dried up amid the pandemic. But it has offered flights on the Incheon-Osaka route despite the virus outbreak.

Jeju Air, which operates 44 B737-800 passenger jets, said net losses deepened to 268.81 billion won from January to September from 17.5 billion won in the year-ago period. 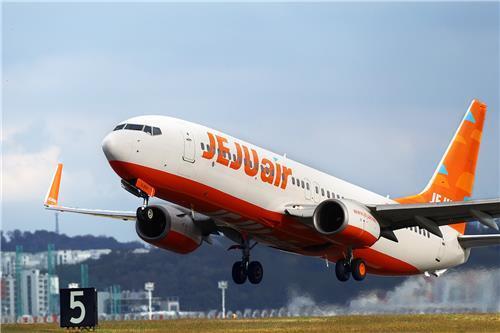