SEOUL, Nov. 10 (Yonhap) -- From the onset of his team's postseason game on Tuesday, Doosan Bears' manager Kim Tae-hyoung practically had his hand on the phone -- the phone from the dugout to the bullpen, that is.

Starter Choi Won-joon couldn't get out of the third inning against the KT Wiz in Game 2 of the second-round series in the Korea Baseball Organization (KBO) postseason. The Bears' 2-0 lead was just cut in half after Choi served up a two-out solo home run to Mel Rojas Jr., and the meat of the Wiz's order was coming up. 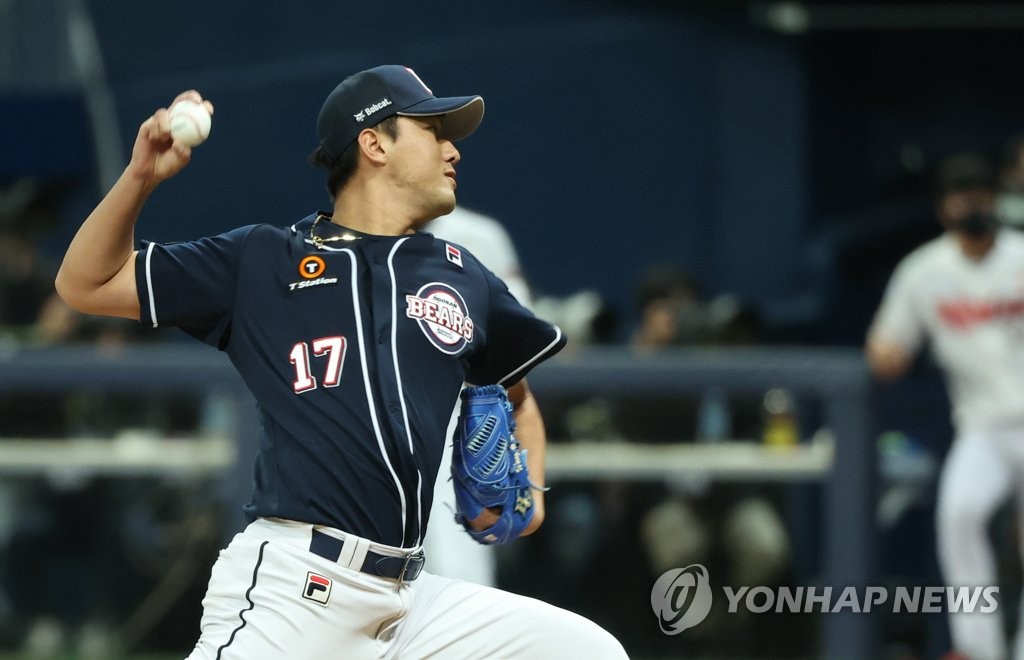 But there was no panic on the Bears' part. Kim's plan all along had been to keep Choi on a short leash and go to the bullpen on any sign of danger.

In came right-hander Kim Min-gyu. He looked a bit wobbly early, giving up a single and a walk, but got himself out of the jam with a strikeout.

He induced a double play to erase a leadoff single in the fourth. After a hit-by-pitch and another single put men at the corners, Kim handed things over to Park Chi-guk.

Park got a fielder's choice groundout to snuff out that rally, and then pitched a clean fifth inning. 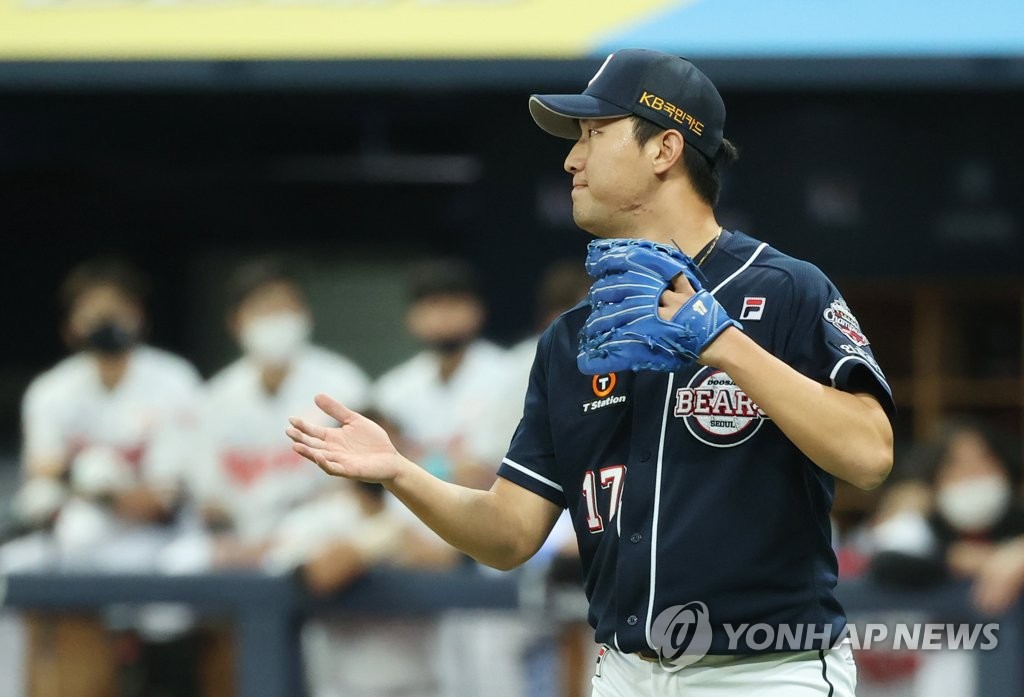 With a man on and two outs in the sixth, another right-hander, Hong Geon-hui, came on to get Shim Woo-jun to pop out to first.

It was the first of seven straight batters Hong retired in his postseason debut. Facing the top of the lineup in the seventh, Hong recorded two strikeouts, including Rojas Jr. for the final out. In the eighth, cleanup Kang Baek-ho grounded out to second, and two flyouts to center followed.

Closer Lee Young-ha, who made 31 pitches over 1 2/3 innings Monday, pitched around a leadoff walk for the save.

It capped off a brilliant night by a quartet of 20-somethings, none of whom had much of a playoff resume to speak of.

Hong, who joined the Bears in a midseason trade from the Kia Tigers, is the elder statesmen from the bunch at 28, but this was his first postseason game. At least Hong had 216 regular season games as his foundation. Kim Min-gyu, the youngest of the group at 21, is a rookie who made 29 regular season appearances. This is Park's second postseason at age 22, and Lee's fourth at 23 years old. 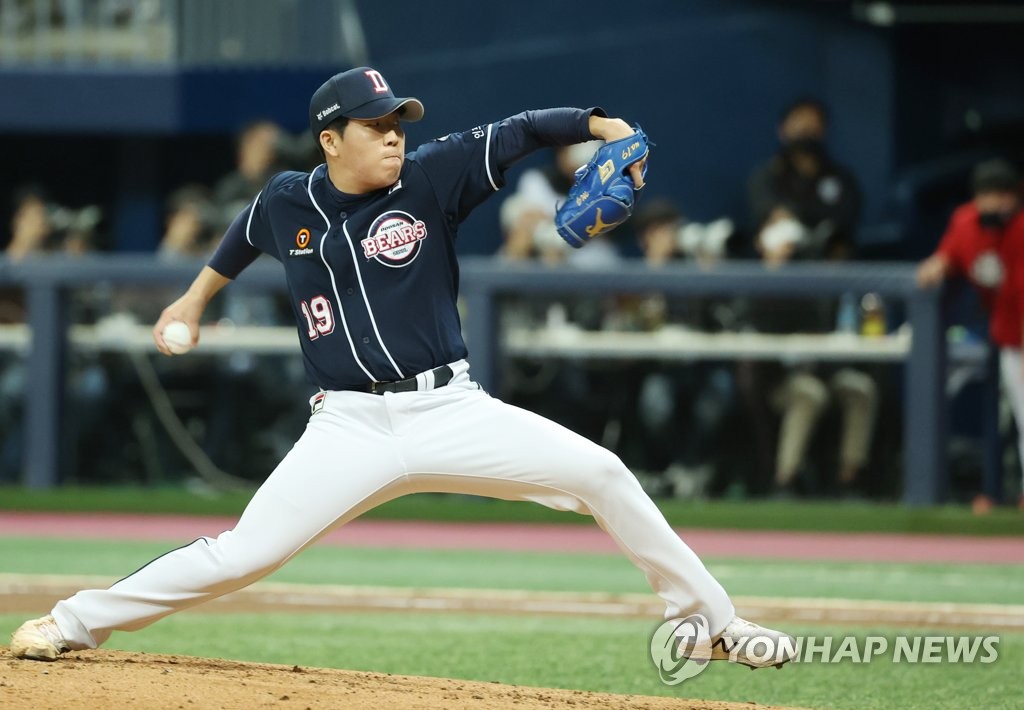 The Tigers made postseasons during Hong's tenure, but the right-hander never made the postseason roster. And with the Bears, it took him four postseason games to finally take the mound in a high-stakes game. He said he'd made sure to stay prepared at all times, especially mentally.

"I wasn't disappointed that I didn't get to pitch earlier. I knew we'd have a lot of games to play this postseason," Hong said. "I was confident that I could get the job done no matter when I pitched."

He admitted he was worried about being a bit rusty after so much time off -- Hong's last regular season appearance was Oct. 22 -- but retiring the first batter took care of jitters.

His manager Kim Tae-hyoung also offered high praise for the right-hander. Kim's plan was to use Hong for one inning and send in another pitcher as a bridge to Lee, the closer, but Kim didn't want to mess with Hong's groove.

"He really exceeded my expectations tonight," Kim said. "If he keeps pitching like this, it'll make our bullpen management so much easier."

Kim added that Park, who was credited with the win, has always had raw stuff to compete against anyone, and he just has to harness his talent.

"He can be inconsistent, but he can always get guys out in key situations," the manager said. "We were able to win tonight because our young arms rose to the occasion." 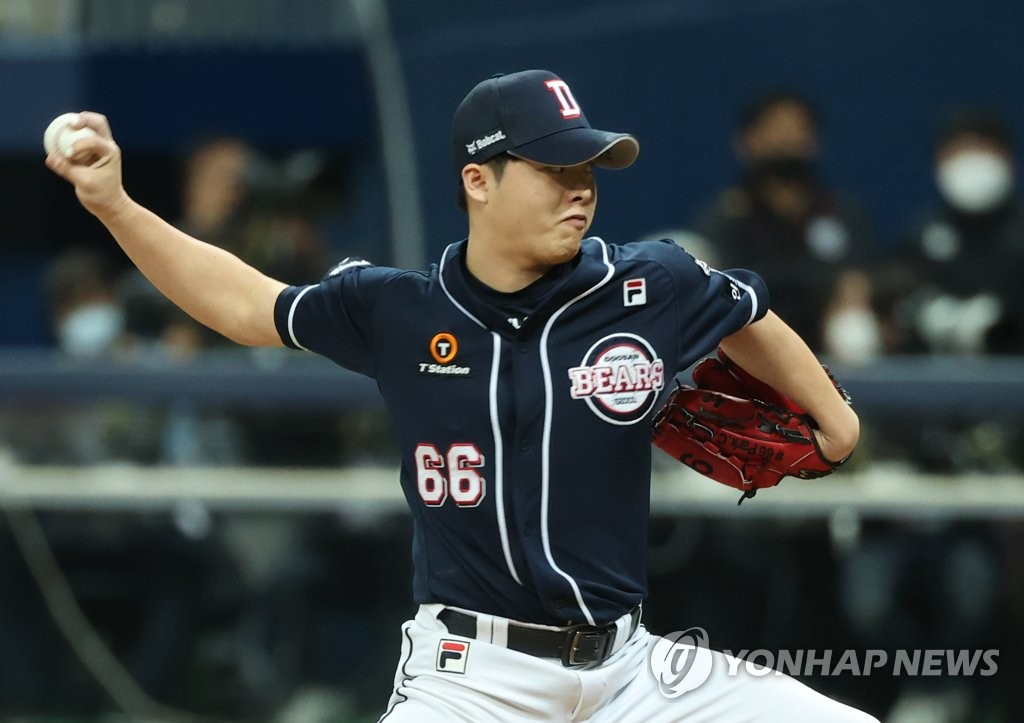