SEOUL, Nov. 11 (Yonhap) -- South Korea's trade volume is unlikely to pass the US$1 trillion mark in 2020 due to the fallout from the coronavirus pandemic and a Sino-U.S. trade row, sources said Wednesday.

The gloomy projection comes as South Korea's trade fell sharply in the first 10 months of the year from a year ago, pounded by the double whammy.

South Korea's exports and imports totaled $798 billion in the January-October period, down 8.4 percent from the same period a year earlier, according to data from the industry and trade ministry.

In order to achieve the milestone, South Korea's trade volume should come to at least $202 billion during the last two months of the year, a long shot in light of last year's record. 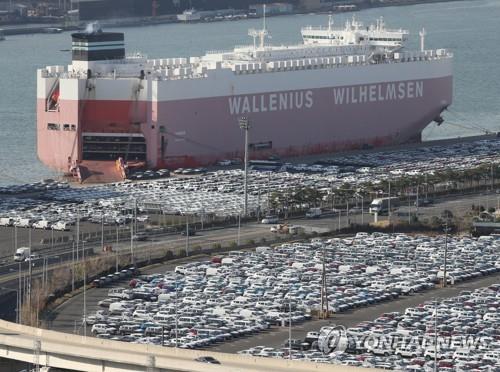 South Korea's exports and imports stood at about $174 billion in the November-December period last year.

It would mark the first time in four years for South Korea's trade volume to hover below the $1 trillion mark.

Yet industry watchers said a recovery in exports has emerged as a positive lead for Asia's fourth-largest economy that relies heavily on overseas shipments for its growth.

In June, the Bank of Korea projected Asia's fourth-largest economy to post $950 billion in trade for this year, down 9.1 percent from a year earlier.
(END)