Lee Nak-yon, chairman of the Democratic Party, ranked second with 22.2 percent, while Gyeonggi Province Gov. Lee Jae-myung came next with an approval rate of 18.4 percent, the poll said. 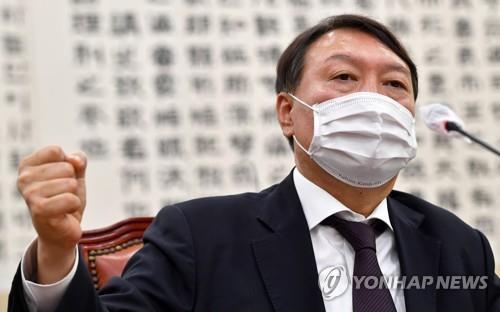 Yoon has never declared political ambitions, though he said recently he will think about how to serve Korean society and people after his term ends. The 59-year-old Yoon's two-year term as the top prosecutor ends in July next year. Some commentators interpreted his remarks as leaving room for a possible entry into politics. The nation's next presidential election is slated for March 2022.

The popularity rates of leading presidential hopefuls from the opposition camp were all in the single digits, with the fourth-ranked independent lawmaker Hong Joon-pyo earning a mere 5.6 percent, according to the Hangil poll.

The pollster noted Yoon was more favored by conservatives than liberals.

The preference for Yoon was strongest among supporters of the main opposition People Power Party (PPP), with 62 percent of them rooting for him. About 32 percent of People's Party supporters chose Yoon as their favorite future leader, while the corresponding rate among non-partisan respondents was 23.7 percent.

By region, Yoon's approval rate was strongest at 33.8 percent in the central provinces of Chungcheong, where his home town is located, compared with 30.4 percent in Busan and neighboring southeastern regions and 27.3 percent in Daegu and surrounding areas. In the southwestern provinces of Jeolla, he was supported by only 7.3 percent.

In Seoul, the support rate for the top prosecutor was 22 percent.