During the meetings, including one with John Allen, head of the Washington-based Brookings Institute, Kang said she stressed the nuclear standoff requires Biden's personal interest and called for an early resumption of the stalled nuclear negotiations with the North.

"That it is an issue that requires preferential interest of the leader, I did emphasize such a point," Kang told reporters in Washington.

"From Brookings Institute President Allen, I was able to listen to the new Biden administration's views and advice on foreign policy, South Korea-U.S. relations, conditions on the Korean Peninsula and U.S.-China relations. Allen said he too will convey our government's views on the Korean Peninsula peace process and other important alliance issues to the president-elect," she added. 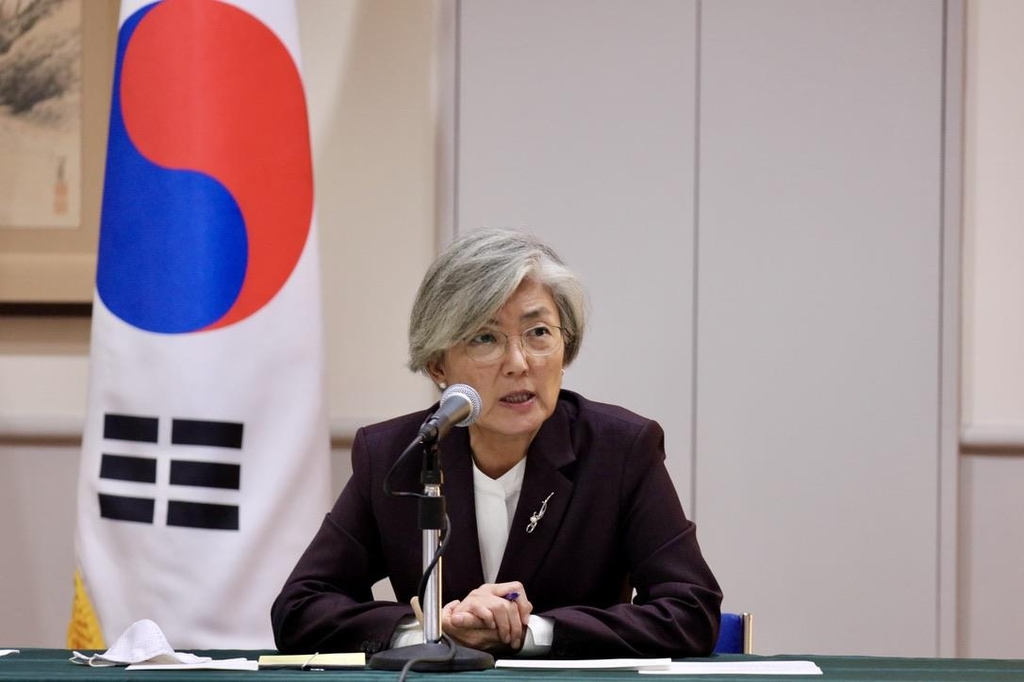 Biden has been highly critical of President Donald Trump's "top-down" summit diplomacy with North Korean leader Kim Jong-un, though he said he would be willing to meet with Kim if such a meeting would actually help rid the North of its nuclear weapons.

U.S.-North Korea denuclearization talks have stalled since February 2019, when President Donald Trump and Kim held their second bilateral summit in Hanoi but walked away without a deal. The first Trump-Kim summit was held in Singapore in June 2018.

Kang arrived in Washington on Sunday, one day after major news outlets here declared Biden as the winner of the presidential election on Nov. 3. Her trip drew attention as to whether she would meet with those close to the U.S. president-elect.

"Both Sen. Murphy and Sen. Coons are people with vast experience in the field of foreign relations, and I was able to hear their thoughts on President-elect Biden's views on diplomatic issues, as well as the direction of the new administration's foreign policy," she said.

"I told those from Congress and academia that we hope to see South Korea and the United States work more closely together on global issues, such as the COVID-19 pandemic and climate change, since President Moon Jae-in and President-elect Biden share common characteristics in that they both place high priority on democracy, peace, climate change and international cooperation," Kang said.

She expressed hope that the new U.S. administration will quickly move up to speed in working closely with its Asian ally, noting Biden and his Democratic Party have a long experience of working with U.S. allies.

"With regard to the South Korea-U.S. alliance, I stressed that our government has a strong determination to further develop the alliance that has served as a linchpin of peace and stability of the Korean Peninsula and Northeast Asian region for the past 70 years and asked for the U.S.' efforts and support for its development," the South Korean minister said.

"I believe I have achieved the intended goals of my U.S. visit this time as I have agreed to maintain our close cooperation with the U.S. on issues related to South Korea-U.S. relations and the Korean Peninsula until the new U.S. administration takes office in meetings with officials from the current administration," she said.

"Also in that I have made a chance to communicate on ways to develop the South Korea-U.S. alliance while meeting with various leaders of Congress and academia that are close to President-elect Biden," Kang added.

She is set to return home Wednesday.