SEOUL, Nov. 11 (Yonhap) -- Seoul's apartment prices surged 58 percent during the presidency of Moon Jae-in, which is 4.5 times the increase rate of the combined period of the preceding Lee Myung-bak and Park Geun-hye governments, a civic group said Wednesday.

The Citizens' Coalition for Economic Justice (CCEJ), a leading progressive civic group, made the assertion in a news conference in Seoul, challenging the incumbent administration's earlier announcement that Seoul's apartment prices rose by merely 14 percent under Moon. 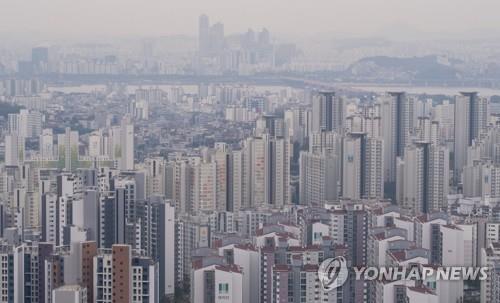 The 2017-2020 apartment price rise is 4.5 times as high as an increase of 3.44 million won tallied for nine years under the preceding two conservative governments. The Lee government lasted from December 2008 to February 2013, and Park served as president from February 2013 to March 2017.

Since its inauguration in May 2017, the Moon government has implemented a string of anti-speculation measures, including steep hikes in real estate taxes, to rein in house prices in Seoul and other major cities, but surging apartment prices have been a major source of public discontent that has dragged down Moon's approval ratings.

Citing data from KB Bank and other public institutions, the CCEJ said apartment prices in the most expensive three wards in southern Seoul -- Gangnam, Seocho and Songpa -- surged 60 percent, or 26.52 million won per 3.3 square meters, from 43.95 million won to 70.47 million won under Moon, which is 4.4 times the nine-year increase of 5.97 million won under Lee and Park.

The civic group also noted that the officially assessed values of apartments, used mainly for taxation, soared 62 percent in Seoul during Moon's presidency, compared with a combined rise of 6 percent during the Lee and Park presidencies.

The group then raised questions about the trustworthiness of the Moon government's real estate statistics, saying the land ministry's claim that Seoul's apartment prices and assessed values of apartments rose by 14 percent and 39 percent, respectively, under Moon may be manipulated.