Trading volume was high at about 1.3 billion shares worth some 18 trillion won (US$16.2 billion), with gainers outnumbering losers 575 to 290.

Foreigners raked in local stocks for a fifth consecutive session, as the Korean won continued to soar against the U.S. greenback.

Amid a bullish run, the combined market cap of the KOSPI and the tech-heavy, secondary KOSDAQ markets stood at a record high of 2,032 trillion won upon the session's close. The previous record was 2,019 trillion won on Jan. 29, 2018, according to the Korea Exchange (KRX) data.

"The easing U.S. election uncertainties and the progresses in (COVID-19) vaccine development have increased the inflow of cash for risky assets and expanded the size of global stock markets," the KRX said in a statement. 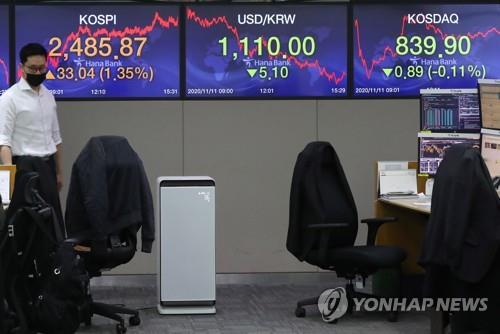 "Anticipation for the COVID-19 vaccine development seems to have pulled up the stock index," said Samsung Securities analyst Seo Jeong-hoon.

Bond prices, which move inversely to yields, closed lower. The yield on three-year Treasurys rose 1.3 basis points to 0.989 percent, and the return on the benchmark five-year government bond added 3.4 basis points to 1.340 percent.