SEOUL, Nov. 11 (Yonhap) -- President Moon Jae-in held a luncheon meeting with a group of veteran diplomats and scholars Wednesday to hear their opinions on the shifting security environment in the wake of the recent U.S. presidential election, Cheong Wa Dae said.

The meeting, held at a banquet hall of the presidential office for nearly two hours, brought together Moon's former and current security advisors, revered professors as well as former ambassadors to the United States.

Among the attendees were Chung Eui-yong, former director of national security; Im Jong-seok, the incumbent special presidential adviser on diplomacy and security; Chang Dal-joong, honorary professor in diplomacy at Seoul National University; Ahn Ho-young, former top envoy to the U.S. who served under the preceding conservative government of Park Geun-hye. 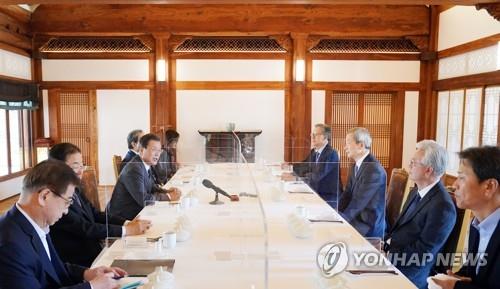 The presidential office noted that the meeting was arranged for Moon "to listen directly from elders" about a security environment that is expected to drastically shift following the American presidential election earlier this month. Former Vice President Joe Biden won the presidency.

It was also designed to delve into a future course of South Korea's diplomatic and security policies against the backdrop of the recent change, Cheong Wa Dae added.

The focal point of the meeting was the need to enhance cooperation for the establishment of lasting peace on the Korean Peninsula and its denuclearization. Also discussed were the necessity of multilateral cooperation on issues like the fight against COVID-19 and climate change, and close cooperation with the U.S. on shared values, like democracy, the office said.

In order to pursue and implement government policies, Moon stressed that his government needs bipartisan and public support, according to the office.