SEOUL, Nov. 11 (Yonhap) -- Sixteen foreign nationals have been deported from South Korea since August after getting caught violating self-isolation rules aimed at containing the new coronavirus, the Ministry of Justice said Wednesday.

The ministry said five foreigners were deported and 11 others ordered to leave for their home countries from Aug. 12 to Tuesday after leaving their designated self-isolation places without permission in violation of Seoul's mandatory self-isolation rules.

Twelve of them were also slapped with fines, it noted. 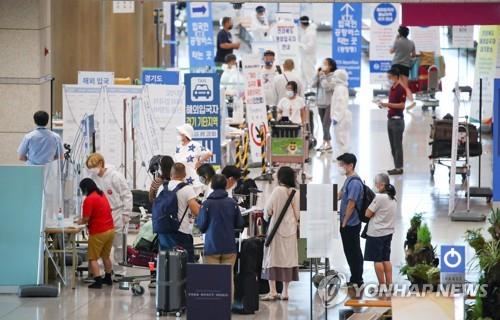 The cumulative number of foreigners deported since the compulsory self-isolation went into effect on April 1 has risen to 61, the ministry noted. In addition, 71 other foreign nationals were forced to leave the country after refusing to comply with the two-week self-isolation, it added.

In one instance, an American, who arrived here on Aug. 20 and was admitted to a hotel for a two-week quarantine, was caught by police while escaping from the hotel after tearing a window screen and jumping from the second floor. The American reportedly sustained injury during landing.

An Uzbek national who entered Korea on July 11 was caught illegally leaving a government-designated accommodation several times to visit a convenience store, bars and other places. The Uzbek citizen later tested positive for COVID-19.

A Chinese national who arrived here on Sept. 4 was accused of getting a job at a construction site after escaping from a state-designated self-isolation place.