WASHINGTON, Nov. 11 (Yonhap) -- U.S. President-elect Joe Biden made a brief trip to a Korean War veterans' memorial in his home state of Pennsylvania on Wednesday as the United States observed its national Veterans Day.

"Biden, holding the hand of his wife, Dr. Jill Biden, and accompanied by the Mayor of Philadelphia, Jim Kenney, arrived at the black marble memorial that stands in a square. U.S. and Korean flags flew overhead," a pool report said.

The visit lasted 15 minutes, during which the president-elect laid three wreaths of flowers at the memorial, according to the report. 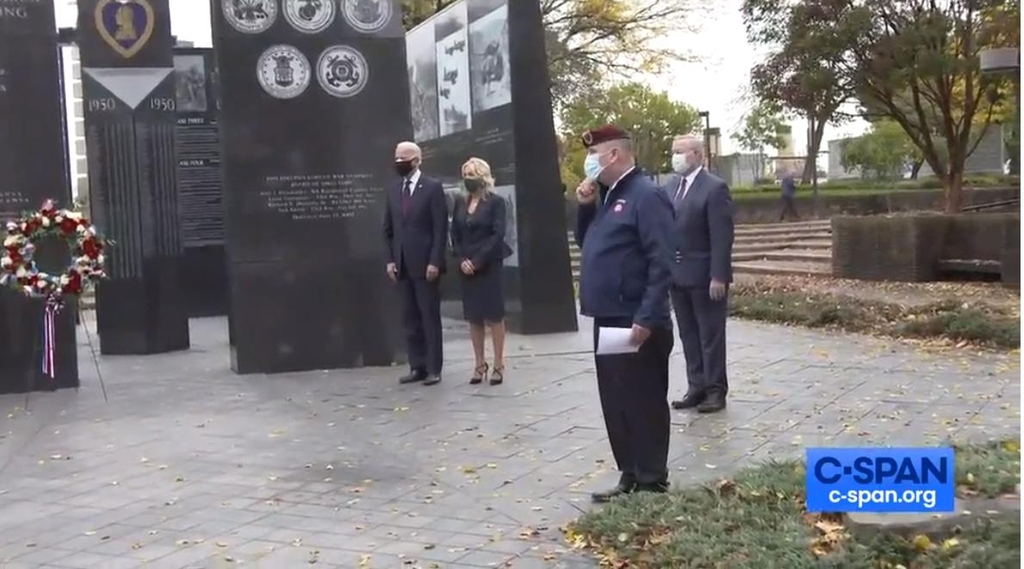 Biden did not offer any remarks.

Still, his visit highlights the alliance between South Korea and the United States that celebrated its 70th anniversary this year.

Biden has said he will, if elected, work to further strengthen the United States' relationship with its traditional allies, including South Korea.

His visit to the memorial also came after the South Korean government said President Moon Jae-in and President-elect Biden may hold a telephone conversation on the day.

There are dozens of Korean War memorials in the U.S., including two in Pennsylvania -- one in Pittsburgh and the other in Philadelphia. Biden was born and raised in Scranton, Pennsylvania, until he was 10 years old.

Biden has been staying at his family home in Wilmington, Delaware, just southwest of Philadelphia, since last week's election.