(ATTN: UPDATES with Moon's remarks in paras 5-8)
By Lee Haye-ah

SEOUL, Nov. 12 (Yonhap) -- President Moon Jae-in on Thursday conferred a posthumous state medal on Chun Tae-il, one of the most important figures in South Korea's labor history, in recognition of his service to the country.

Moon awarded the Mugunghwa Medal of the Order of Civil Merit to Chun during a ceremony at Cheong Wa Dae attended by his family members and friends. 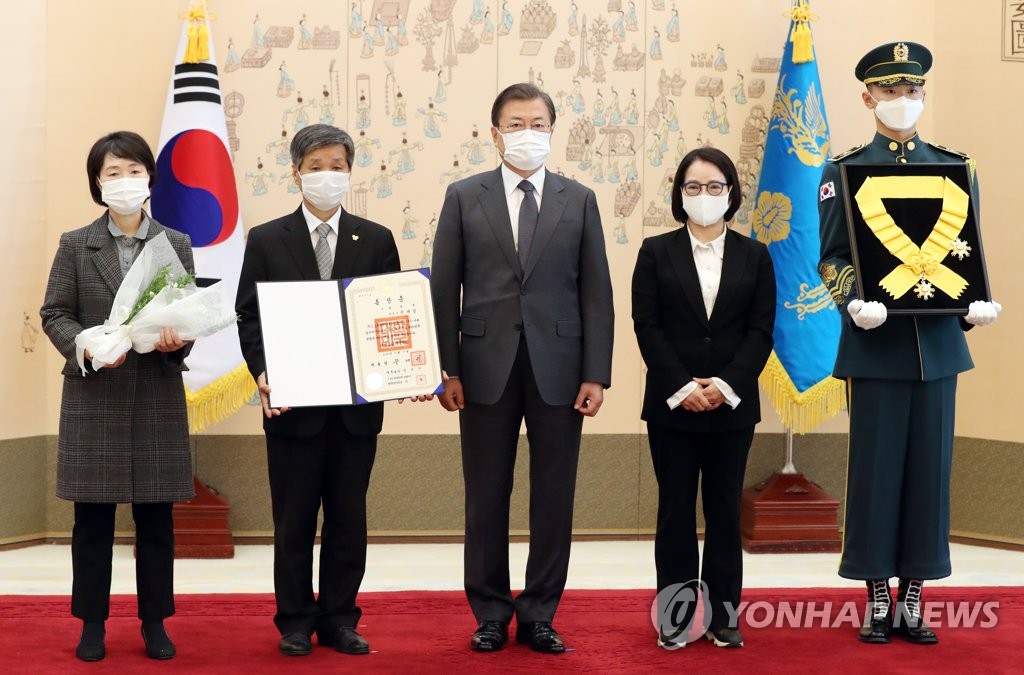 The ceremony came on the eve of the country's annual commemoration of Chun's tragic death five decades earlier. Chun, who was a 22-year-old tailor at that time, burned himself to death on Nov. 13, 1970, while fighting for better working conditions at his textile company.

The Mugunghwa Medal is the highest ranking of five medals that make up the Order of Civil Merit, and Chun is the first labor activist to receive it, the presidential office pointed out.

"This medal given to Chun Tae-il today is a symbolic expression of my administration's commitment to achieving a society that respects labor," Moon said during a post-ceremony meeting, according to his spokesman Kang Min-seok.

The president then recalled how the Chun incident, which occurred when he was a high school senior, awakened him to the harsh conditions facing laborers and labor activists here. Moon noted that he later became a labor lawyer.

"The road to a labor-respecting society is still long and progress is slow, but our commitment will not waver," he said, adding that some of Chun's demands have become reality, including the reduction of working hours to 1,900 hours per year, a shortened work week from six days to five and the implementation of a minimum wage.

On Friday, Chun's family and friends plan to dedicate the medal to the late activist at his grave and then put it on display at the Chun Tae-il Memorial Hall in central Seoul.