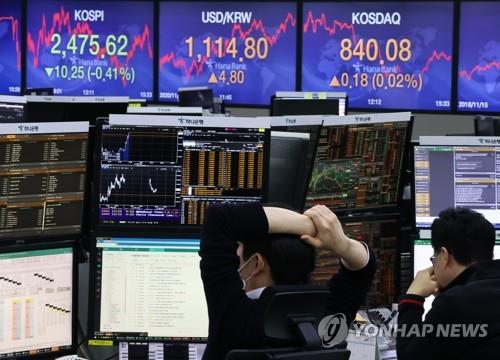 The KOSPI got off to a weak start after the benchmark index hit an over 2-year high the previous session over vaccine hopes.

"It is notable that the actual mass injections of COVID-19 vaccine would take a considerable time, whereas the spreading speed of the illness is uncontrollably fast," Kiwoom Securities analyst Seo Sang-young said.

"Certain levels of lockdowns may be inevitable in order to handle the outbreaks, and that would cause some economic slowdowns," he added.

The local currency closed at 1,114.8 won per dollar, down 4.8 won from the previous session's close.

Bond prices, which move inversely to yields, closed higher. The yield on three-year Treasurys lost 2 basis points to 0.969 percent, and the return on the benchmark five-year government bond fell 2.1 basis points to 1.319 percent.