SEOUL, Nov. 12 (Yonhap) -- Unionized workers at Hanjin Heavy Industries & Construction Co. said Thursday that their jobs should be retained even after the company is sold off.

On Oct. 26, the Korea Development Bank (KDB), the main creditor of Hanjin Heavy, finalized the preliminary bid to sell a controlling stake in the shipbuilder. 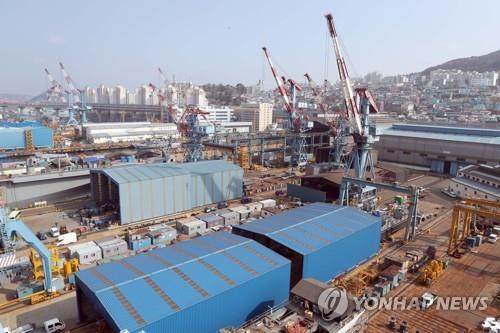 The union representing the majority of workers at Hanjin Heavy said in its newsletter that the job security and the future plan to revive the company should be proposed.

Civic groups in Busan, where the shipyard of Hanjin Heavy is located, have been worried that the shipyard may turn into an apartment complex after being sold to private equity funds.

According to the union, the bidders will study the books of Hanjin Heavy this month, while creditors plan to pick up the preferred bidder for the stake next month.

The stake sale is expected to take two or three months to be concluded after gaining permission from authorities, including the country's arms procurement agency Defense Acquisition Program Administration (DAPA).