SEOUL, Nov. 12 (Yonhap) -- The KT Wiz will live to see at least another day in the South Korean baseball postseason.

The Wiz defeated the Doosan Bears 5-2 to stave off elimination in the best-of-five penultimate round in the Korea Baseball Organization (KBO) postseason on Thursday.

Starter William Cuevas fired eight strong innings, and the Wiz broke out for five runs with two outs in the top of the eighth inning for the victory at Gocheok Sky Dome in Seoul. This was the Wiz's first postseason win in franchise history, which dates back to 2015.

The Bears still lead the series 2-1 and can finish off the Wiz in Game 4 on Friday, back at the dome.

In their two previous losses, the Wiz had scored only three runs combined. 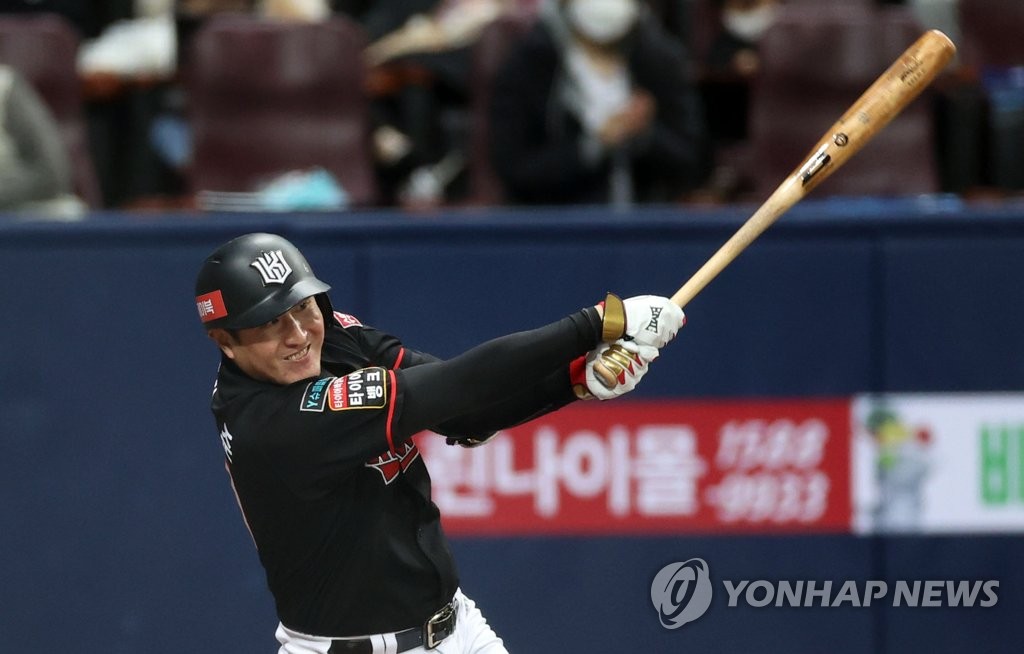 With Cuevas and his counterpart, Raul Alcantara, both on their "A" game early, the teams traded zeroes through the first seven innings.

It wasn't for lack of trying. Cho Yong-ho led off the game for the Wiz with a single, but got thrown out trying to steal second. Hwang Jae-gyun followed with a double but was stranded at second base.

The Bears got their first rally in the top third, with Kim Jae-ho reaching on an infield single and then moving to second on a sacrifice bunt. Cuevas stranded the runner by retiring the next two batters on groundouts.

The Wiz had a man in scoring position in the top fifth, sixth and seventh but failed to cash in. In the bottom sixth, the Bears put a runner at third for the first time in the game, following an error and a sacrifice bunt. Jose Miguel Fernandez, the regular season hit king, and Oh Jae-il couldn't bring him home. 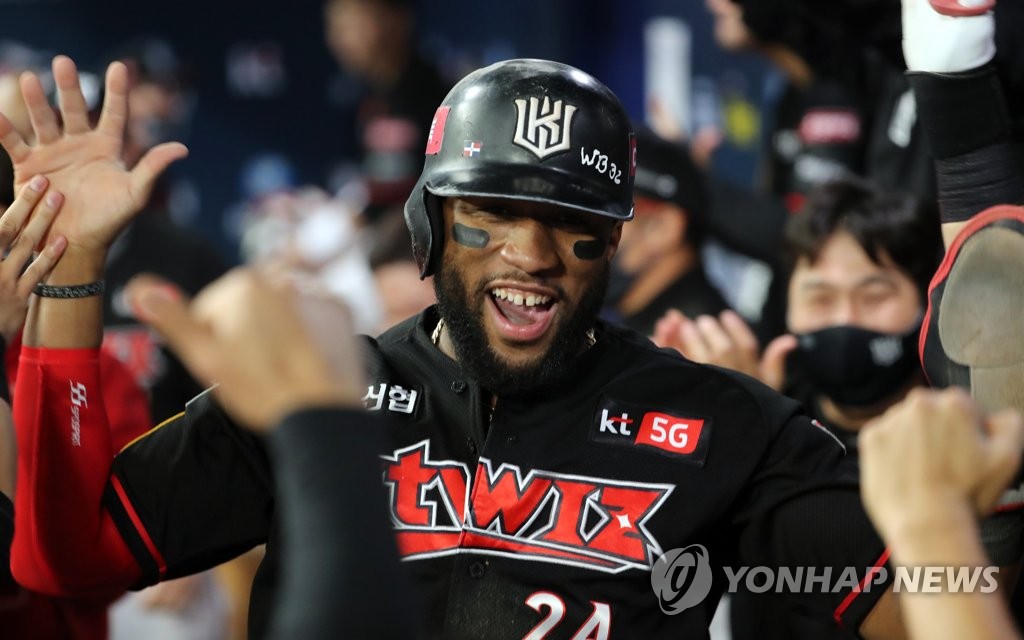 That set up the decisive eighth inning for the Wiz.

A walk and a single after two outs put men at the corners for Yoo Han-joon, who moved up from fifth to cleanup in the lineup for this game. Yoo hit a hard bouncer up the middle, and shortstop Kim Jae-ho, trying to make a diving grab, had the ball go off his glove and trickle into center field. That allowed Hwang Jae-gyun to score easily from third for a 1-0 KT lead.

That hit knocked Alcantara out of the game. Reliever Hong Geon-hui threw a first-pitch fastball on the outside corner against Kang Baek-ho that catcher Park Sei-hyok somehow missed, and Mel Rojas Jr. charged home to score on that passed ball to make it a 2-0 game. 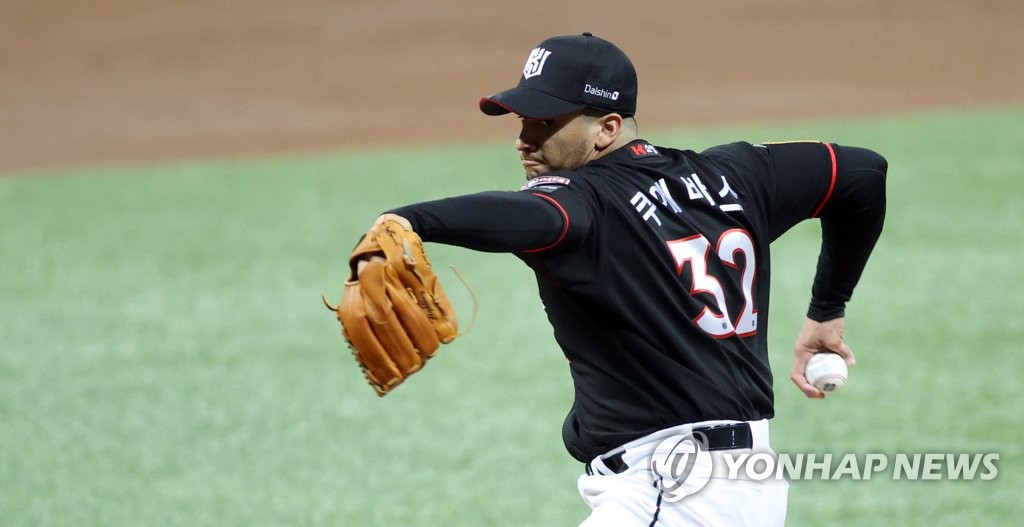 Hong intentionally walked Kang and then walked the next batter to load the bases for Bae Jung-dae. On a 3-1 count, Bae lifted a high fly ball to shallow center that dropped in no man's land, and two more runners came home for a 4-0 lead.

Jang Sung-woo delivered an RBI single that put the Wiz up 5-0. All told, the Wiz batted around in the eighth, and all four of their hits in that inning came with two outs.

The Bears cut the deficit to 5-1 on Oh Jae-won's solo home run in the bottom eighth and got only one more run back, courtesy of Kim Jae-hwan's solo shot in the ninth. 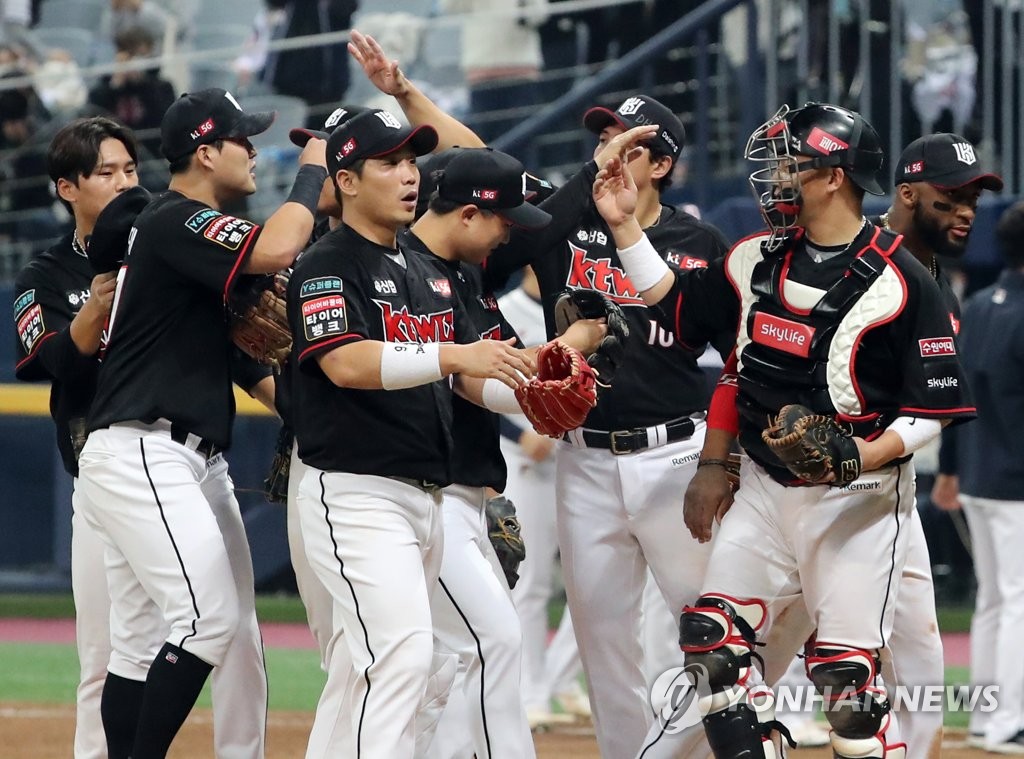 KT manager Lee Kang-chul said he was happy to be a part of franchise history with the inaugural postseason victory.

"This feels like winning my first game as a rookie on the mound," the former All-Star pitcher said with a smile. "I never knew winning a postseason game would be so tough. We'll try to keep it going."

Lee said Cuevas deserved all the credit for the victory.

"He pitched the game of his life," Lee said. "Though we didn't capitalize on some early opportunities, Cuevas kept us in the game. Then with two outs in the eighth, our batters did some damage."

Doosan skipper Kim Tae-hyoung said he was more disappointed with the way his team lost than with the defeat itself.

"We barely put up any fight. It would have been nice if we'd had those two home runs earlier in the game," Kim said. "Our left-handed batters had no answer against Cuevas' cutter."

Lee said he was buoyed by the breakout performances from slumping hitters. Kang Baek-ho, moved down from the cleanup spot to No. 5, went 3-for-4, after going 1-for-8 in the two previous games.

"I could tell he had a better focus at the plate than earlier games," Lee said. "If our offense stays hot tomorrow, we can even this series, and then the momentum will be fully on our side. At 2-2, no one knows how the series will play out." 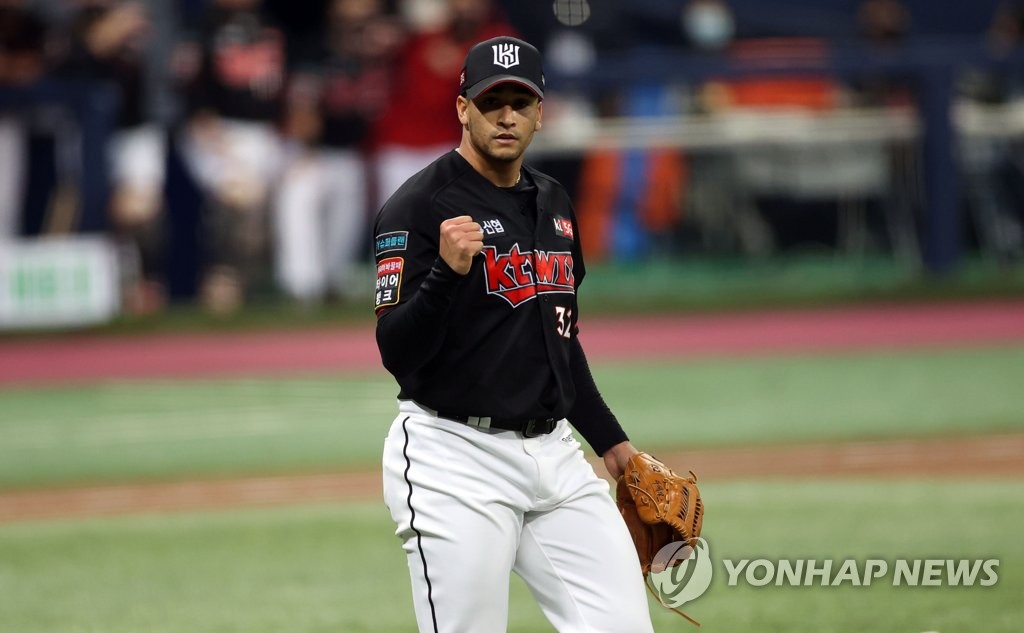