SEOUL, Nov. 13 (Yonhap) -- North Korean individuals have taken to Twitter to post about their daily lives and domestic news, in a rare move by the reclusive country presumed to be aimed at reaching a broader audience through a more approachable style.

It also appears to be in line with North Korea's recent stepped-up efforts to embrace social media, including a YouTube channel, as new propaganda vehicles.

Two accounts appeared in October on Twitter, including one signed up as Kim Myong-il, who claims to be a director of the Committee for the Peaceful Reunification of the Fatherland that handles inter-Korean relations.

Another account was signed up under the name Han Song-il, a director at an institute for unification in the North.

"I hope to deliver the good news within North Korea or on inter-Korean relations, as well as information on our culture and history, and to communicate actively with many internet users in many areas," Han wrote in his first Twitter post on Oct. 1.

Many of the Twitter posts are no different from the propaganda material usually carried by North Korean state media. They have mainly criticized South Korea, praised the communist country or showed support for the nationwide antivirus campaign and an "80-day campaign" to fight internal challenges as ordered by leader Kim Jong-un.

But several posts also cover their mundane everyday life, including those on smoking habits.

"Recently Anti-Smoking Law has been adopted ... I am not much of a chain smoker but I pretty enjoy smoking. No matter how tough it might be I am determined to quit smoking for the benefit of myself and cleaner environment," Kim tweeted Friday.

Many posts are also written in English, Chinese and Japanese, apparently intended to reach broader audiences in many countries.

This marks the first time a Twitter account for a North Korean individual has showed up. It is still unclear whether the accounts are actually run by them, given that North Korea is known to be highly restrictive in allowing its people to use the internet.

Several propaganda outlets such as Uriminzokkiri has Twitter accounts. 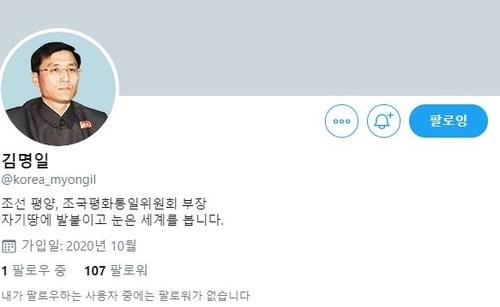 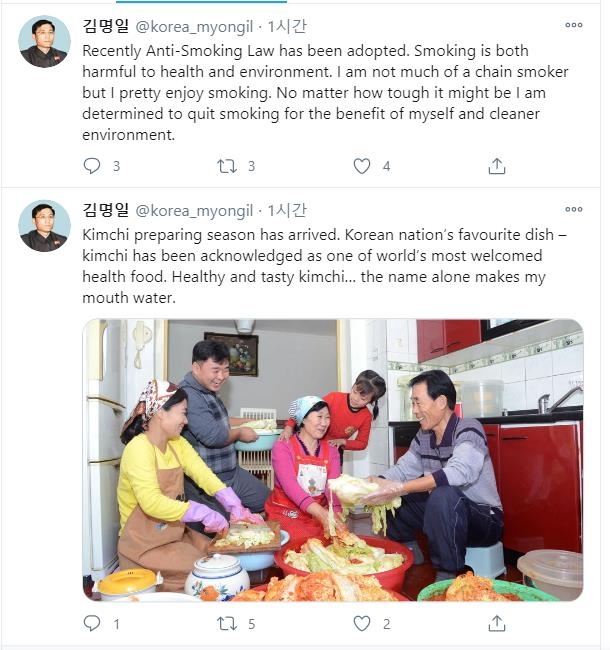