SEOUL, Nov. 13 (Yonhap) -- South Korea has not received any formal request from the United States to join the so-called Quad, a regional strategic coalition widely viewed as aimed at containing China's assertiveness, according to a senior Cheong Wa Dae official Friday.

"In connection with the Quad, there has been no formal request at all made by the U.S. government to our government," Suh Choo-suk, deputy director of Cheong Wa Dae's national security office, said during a parliamentary session.

The Quadrilateral Security Dialogue, also known as Quad, groups together the U.S., Japan, Australia and India.

Speculation has been rampant that Washington is putting thinly veiled pressure on Seoul to participate in the forum as it's reportedly considering the broadening of the membership as "the Quad Plus."

"As far as I know, there has been no actual push for the Quad Plus," Suh told lawmakers.

He pointed out, "It remains to be seen whether (the U.S. will retain the initiative) after the launch of the new administration of (Joe) Biden."

Many voice concern about the possibility that the Biden government will get tougher on Beijing, a close neighbor and key economic partner of Seoul. The left-leaning Moon Jae-in administration has endeavored to strike a balance between its efforts to beef up the alliance with the U.S. and strengthen strategic relations with China. 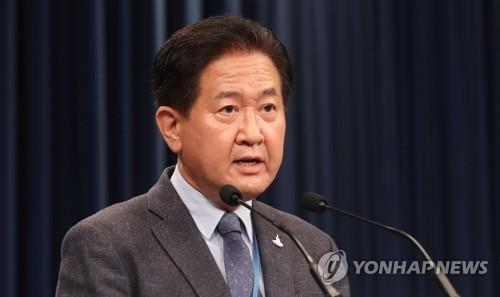