SEOUL, Nov. 14 (Yonhap) -- South Korean President Moon Jae-in attended a virtual summit with the leaders of Japan and China as well as 10 Southeast Asian countries Saturday and stressed the need for closer partnerships for health care and economic growth.

"As the COVID-19 situation is being prolonged, there's an increasing number of problems that we have to resolve together," Moon said, delivering his opening remarks at the annual ASEAN Plus Three Summit. ASEAN stands of the Association of South East Asian Nations.

It set the stage for Moon's first meeting with Suga, albeit via video links, since he became Japan's prime minister in September. Moon began his statement with a special greeting to Suga. 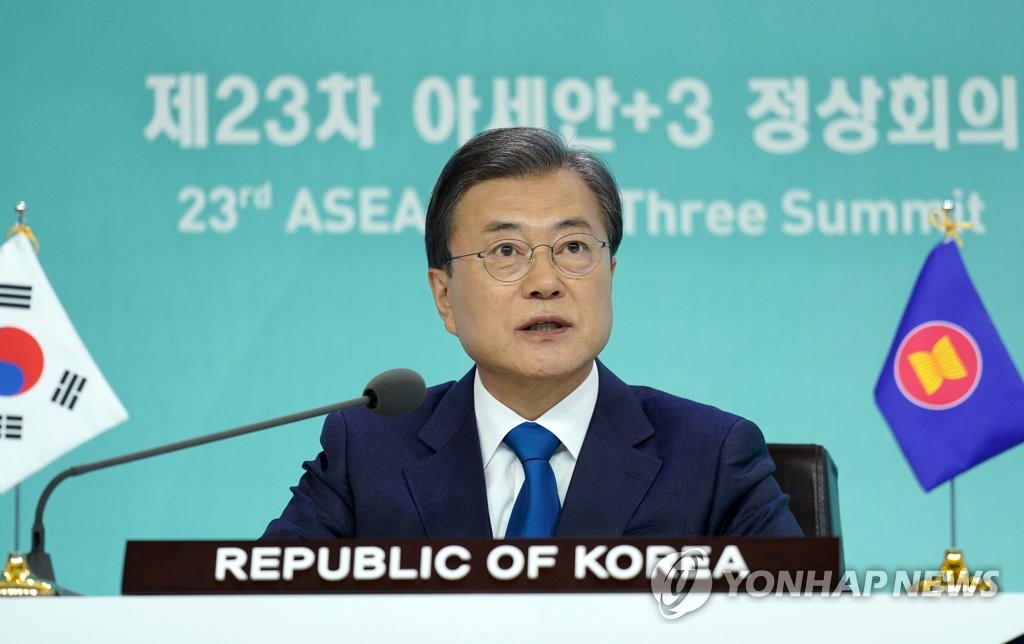 Moon then suggested that the 13 members of the group, launched in response to the 1997 Asia-wide financial crisis, upgrade health care cooperation by a notch and make joint efforts for the development and fair supply of coronavirus vaccines and treatments.

"We need to establish a quick and transparent coordination system in preparation for new infectious diseases that can occur anytime," Moon said.

Regarding the economy, he also called for "preemptive" preparations for the post-coronavirus era.

He cited concerns about a wave of protectionism, uncertainty in financial markets and possible expansion of inequality amid an accelerating transition to the digital economy.

"Those are problems hard to solve with the power of a single nation," he added. "We should strengthen the resilience of the economy and pool wisdom to find a way for inclusive and sustainable growth."

Moon expressed hope that the ASEAN Plus Three group will play a role for the post-coronavirus development of the global economy. 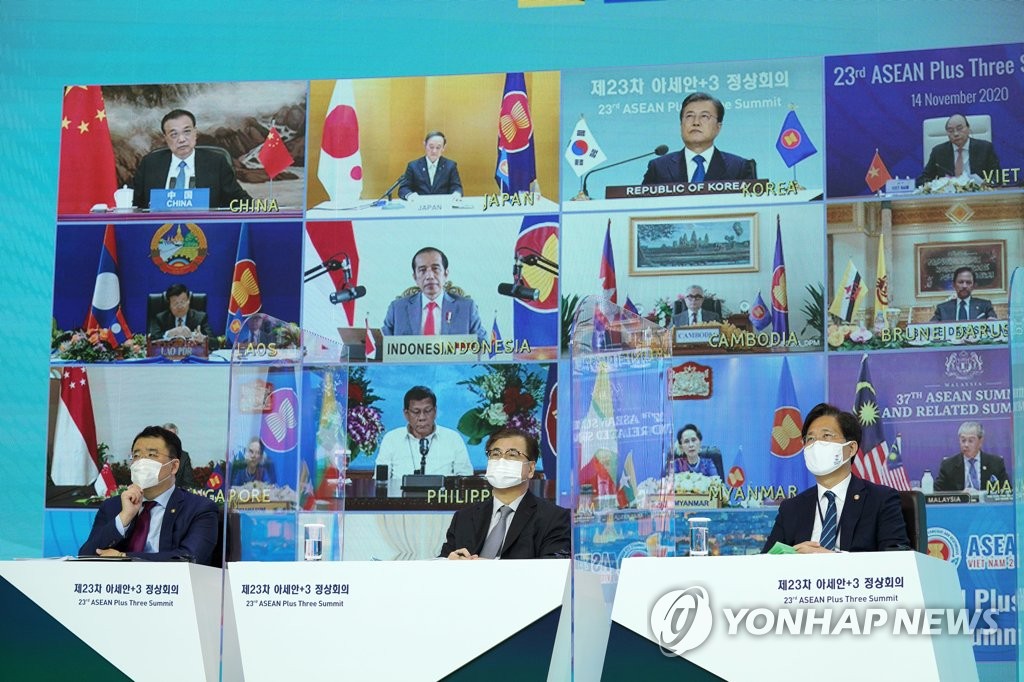 After making the brief remarks in front of pool reporters, Moon went into closed-door discussions, in which he was quoted as emphasizing the importance of free trade and multilateralism for the recovery of trade and investment hit by the coronavirus pandemic.

He also voiced hope that the cross-border exchanges of "essential" personnel will be expanded on a level not to obstruct coronavirus prevention measures in place, according to Cheong Wa Dae spokesman Kang Min-seok.

Moon cited "fast-track" and "special entry procedures" for business people, which South Korea has adopted in cooperation with several countries, Kang said in a press briefing.

Later in the day, he participated in a broader ASEAN-hosted session, called the East Asia Summit (EAS), including the United States, Russia, Australia, India and New Zealand.

In the session, held via videoconference as well, he put forward a pair of suggestions for "solidarity and cooperation" against the coronavirus and peace on the Korean Peninsula and in East Asia, according to Kang.

"The first is multilateral cooperation on health care and response to infectious diseases," the president was quoted as saying.

Moon mentioned his offer, made in his U.N. General Assembly speech last year, of launching a Northeast Asia Cooperation Initiative for Infectious Disease Control and Public Health, in which North Korea would participate as a member along with China, Japan, Mongolia and South Korea.

He also suggested that the 18 member states of the EAS join hands to help ensure that the 2021 Tokyo Olympics and the 2022 Beijing Winter Olympics take place without safety and coronavirus concerns.

If successful, it will give the world greater hope for overcoming the coronavirus and bringing peace to the region, Moon added.