SEOUL, Nov. 14 (Yonhap) -- South Korea and the United States issued a second "fact sheet" on the outcome of bilateral cooperation between their regional policy initiatives on Saturday, reiterating their collaboration to create a "safe, prosperous and dynamic" Indo-Pacific region.

The fact sheet, the second of its kind following one released in November last year, entails progress in efforts to promote cooperation between Seoul's New Southern Policy and Washington's Indo-Pacific Strategy.

Korea's policy seeks to strengthen economic and diplomatic ties with the Association of Southeast Asian Nations (ASEAN) and India, while the U.S. strategy is aimed at enhancing America's ties with partner countries and protecting what it calls the rules-based order in the region.

"As allies whose relationship is grounded in our shared values, the Republic of Korea and the United States continue to work together to create a safe, prosperous and dynamic Indo-Pacific region through cooperation between the Republic of Korea's New Southern Policy and the United States' Indo-Pacific Strategy based on the principles of openness, inclusiveness, transparency, respect for international norms and ASEAN centrality," the fact sheet reads.

The diplomatic document touched on the allies' cooperation in various areas, including infrastructure, energy, the digital economy, smart cities and natural resources management, as well as cybersecurity, maritime security and marine environmental protection.

It was released after Ko Yun-ju, the foreign ministry's director-general for North American affairs, held talks with Marc Knapper, deputy U.S. assistant secretary of state for Korea and Japan, in Seoul on Friday.

"The two sides agreed to continue to develop cooperation between the two countries' regional initiatives to promote regional peace and prosperity based on the principles of openness, inclusiveness and transparency," the ministry said in a press release. 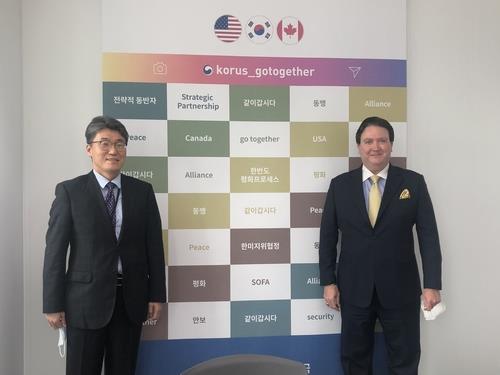