SEOUL, Nov. 15 (Yonhap) -- South Korea signed what will be the world's largest free trade agreement on Sunday after concluding related talks during a virtual summit of President Moon Jae-in and leaders of 14 partner countries.

The Regional Comprehensive Economic Partnership (RCEP) involves 10 members of the Association of Southeast Asian Nations (ASEAN) as well as South Korea, China, Japan, Australia and New Zealand, and their combined gross domestic product accounts for a third of the world's total.

"We note that the RCEP Agreement is an unprecedented mega regional trading arrangement that comprises a diverse mix of developed, developing and least developed economies of the region," Moon and his counterparts said in their joint statement.

They added, "We believe that RCEP, being the world's largest free trade arrangement, represents an important step forward toward an ideal framework of global trade and investment rules." 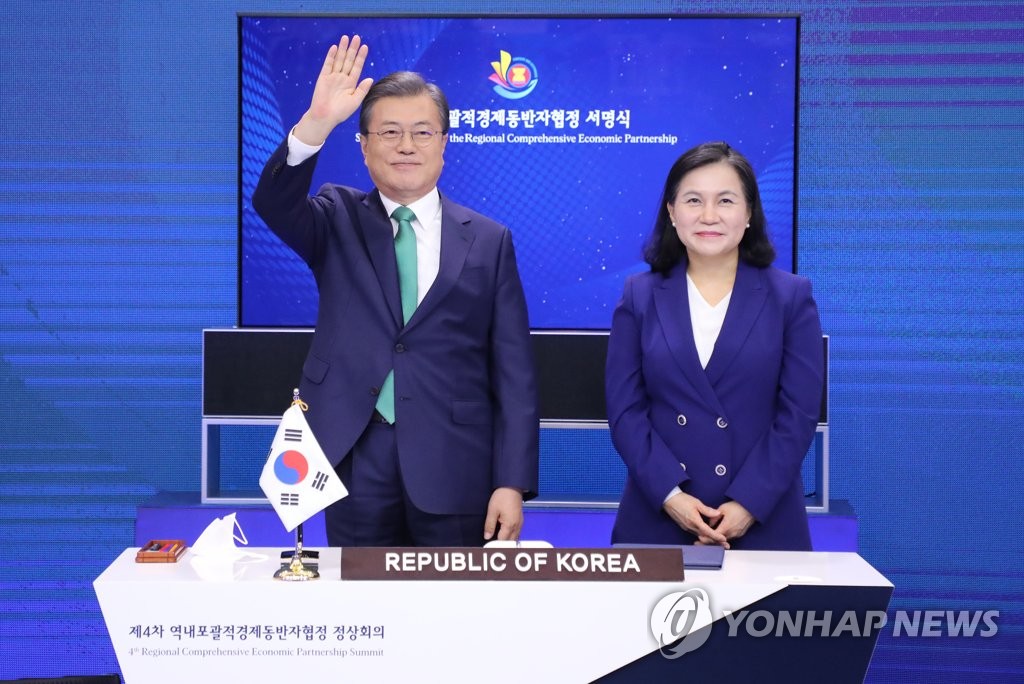 The pact calls for eliminating a considerable amount of tariffs on exports of goods.

For instance, a South Korean firm selling automobile parts to Indonesia currently faces as much as 40 percent tariffs, but the rates will be reduced to as low as zero once the RCEP takes effect, according to Cheong Wa Dae.

In particular, the signing of the RCEP deal came as the world is stricken by the COVID-19 pandemic and its adverse economic impact.

The leaders said it "demonstrates our strong commitment to supporting economic recovery, inclusive development, job creation and strengthening regional supply chains as well as our support for an open, inclusive, rules-based trade and investment arrangement."

Cheong Wa Dae described the RCEP signing as a "core result" of the Moon administration's New Southern Policy aimed at improving strategic ties with Southeast Asian nations and also an opportunity for South Korea to become a "pacesetting" economic power.

The president was quoted as saying that he's sure that it will "contribute to the recovery of multilateralism and the development of free trade around the world, beyond the region."

Moon added he expects the opening of the world's biggest e-commerce market and the facilitated movement of people, materials and companies within the bloc.

RCEP talks began in 2012. India has dropped out of the negotiations, arguing that China would benefit more from the pact.

The leaders of the RCEP member states stressed that they still value India's role in the bloc and reiterated that "the RCEP remains open to India," given its strategic importance as a regional partner in creating deeper and expanded regional value chains.

The South Korean government plans to speed up domestic procedures for getting the RCEP ratified so that it can go into effect at an early date.

It's the first time that the country has signed a free trade agreement through an online event.

On concerns about a possible conflict between the RCEP and the Comprehensive and Progressive Agreement for Trans-Pacific Partnership (CPTPP), meanwhile, a Cheong Wa Dae official said the two are not "contradictory" but "complementary," as several RCEP members take part in the CPTPP.

It's "not the right time yet" for Seoul to decide whether to join the CPTPP, the official said on condition of anonymity.