The country's new coronavirus cases hovered above 200 for a third consecutive day as cluster infections across the country piled up, prompting health authorities to "seriously" consider raising the country's social distancing measures by one notch.

The country reported 223 more COVID-19 cases, including 193 local infections, raising the total caseload to 28,769, according to the Korea Disease Control and Prevention Agency (KDCA).

Daily infections stayed in the triple digits for the ninth consecutive day, with cases exceeding 200 for the first time in 73 days on Saturday.

Health authorities attributed the sharp growth to chains of cluster infections from private gatherings and public facilities across the nation, which made it harder to trace potential cases and curb the spread of the virus. 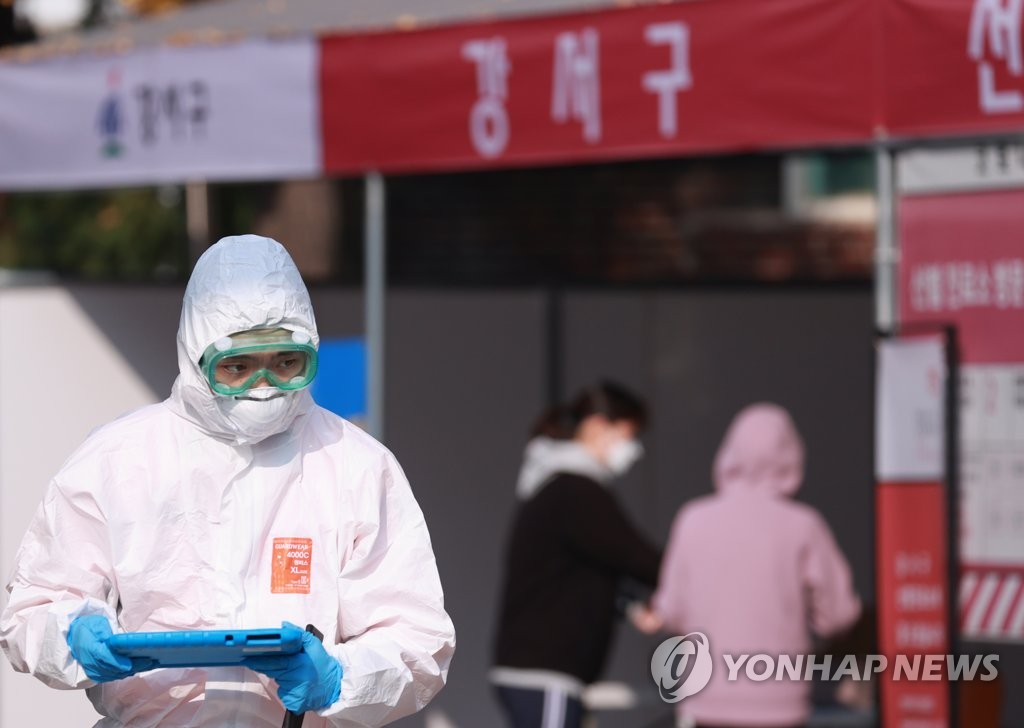 The KDCA said the number of new coronavirus cases could go up sharply during the flu season, coupled with a flurry of year-end meetings and a nationwide college exam slated for early December, citing a recent coronavirus model that projected 300-400 new cases in two to four weeks.

"The KDCA expresses concerns over the hike in the nationwide spread due to sporadic community infections not only in the Seoul metropolitan area but also in other regions," KDCA Director Jeong Eun-kyeong said in a briefing. "There is a high possibility of COVID-19 spread due to various risk factors, including year-end gatherings, increased indoor activities and other respiratory diseases."

Health authorities said the recent spread of the new coronavirus in various community settings poses serious challenges to antivirus efforts, noting it is considering raising the social distancing scheme from Level 1 to Level 1.5 starting as early as Thursday to slow down the spread of COVID-19.

"The COVID-19 spread is in a serious stage with continued infections from gatherings of family and friends, and public facilities," Health Minister Park Neunghoo said in a meeting with senior officials. "We are at a crossroad of adjusting the social distancing scheme."

Ahead of enforcing tougher social distancing measures, the government on Sunday issued a "preliminary warning" for the greater Seoul area and the eastern province of Gangwon, which reported a rising number of cases over the past week.

Some cities, including Cheonan and Asan in South Chungcheong Province; Wonju in Gangwon Province; and Suncheon, Gwangyang and Yeosu in South Jeolla Province, have already adopted Level 1.5 to cope with rising cases in the regions.

The defense ministry said it will adopt Level 1.5 social distancing for military units in the Seoul metropolitan area and the eastern province of Gangwon for two weeks starting Tuesday, following a series of coronavirus infections in the regions.

Under the measures, troops will be ordered to minimize events, business meetings and trips, with visits to nightlife facilities banned, according to the ministry. 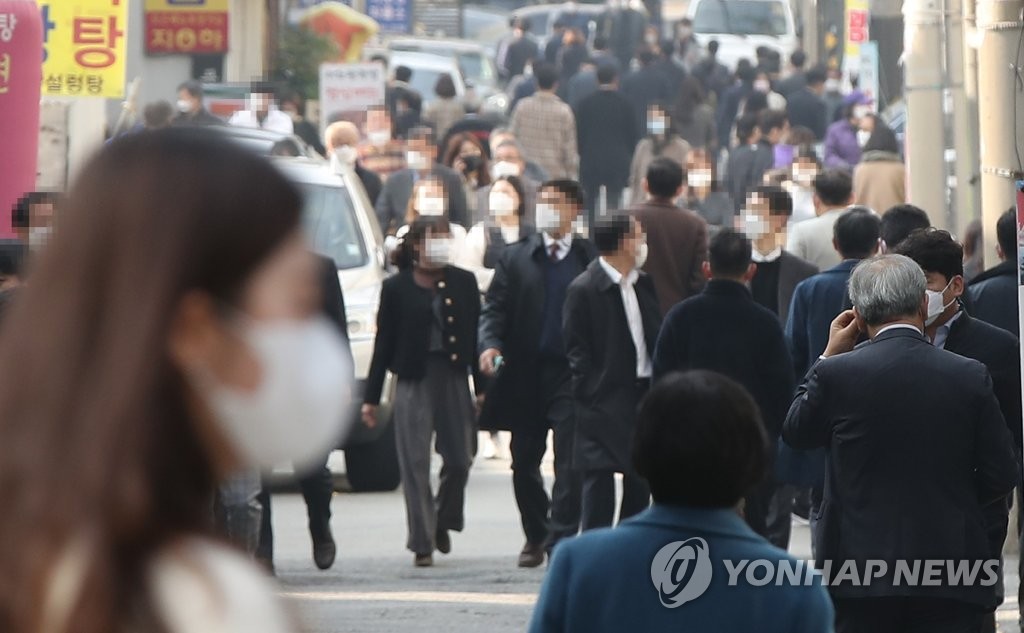 South Korea has kept the Level 1 social distancing scheme under a new five-tier system nationwide since earlier this month, although some cities and provincial governments upped their virus infection preventive measures.

People are still allowed to carry on with most of their daily routines under Level 1.5, but gatherings of 100 or more people will be regulated, though not completely banned.

The average daily number of local patients from Nov. 8-14 stood at 122.4, marking a sharp hike from the previous week's 88.7. The daily new cases from abroad also increased from 21.7 to 28.1 over the one-week period, the KDCA said.

The daily number of new cases in the Seoul metropolitan area amounted to nearly 100, the threshold number for the Level 1.5 social distancing scheme.

A total of 15 died from the coronavirus over the past week, all of them aged over 50, while 13 had underlying diseases, it said. 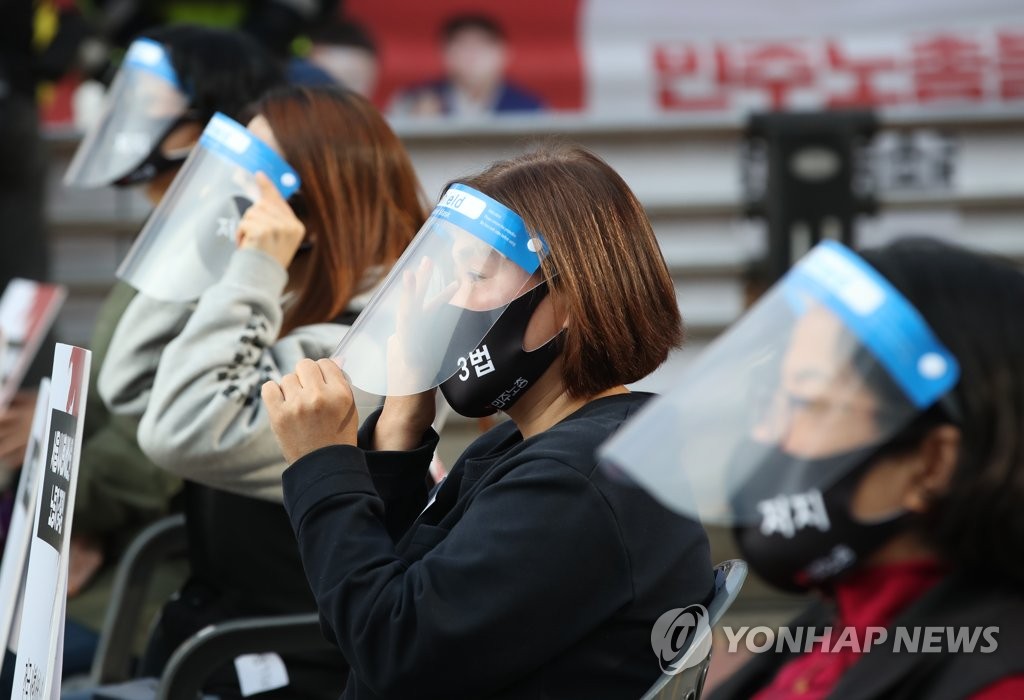 Among the locally transmitted cases, the capital city of Seoul accounted for 79 cases, and Gyeonggi Province that surrounds Seoul reported 39. Incheon, west of Seoul, had 10 more.

The number of new cases in the greater Seoul area, which houses around half of the nation's population, surpassed 100 for four days in a row.

The country added 30 imported cases, with 20 of them being foreign nationals.

The number of seriously or critically ill COVID-19 patients came to 55, slightly down from 56 on Sunday.

The KDCA reported one additional death, raising the total at 494. The fatality rate came to 1.72 percent.

The number of people released from quarantine after making full recoveries came to 68, up 55 from the previous day.

(2nd LD) S. Korea warns of another wave of pandemic as new virus cases over 200 for 3rd day

(2nd LD) S. Korea warns of another wave of pandemic as new virus cases over 200 for 3rd day