SEOUL, Nov. 16 (Yonhap) -- Eight members of a voice phishing ring have been arrested in South Korea and China and investigators are looking into suspected links to a North Korean hacker, officials said Monday.

Police and the National Intelligence Service worked together to arrest the members for allegedly stealing around 2 billion won (US$1.8 million) from about 200 South Koreans by operating a phishing scam from China. All of them are South Koreans in their 20s and 30s.

Four of them were arrested between January and June after returning to South Korea due to the coronavirus pandemic. The other four were arrested in the Chinese city of Tianjin in July with the help of Chinese police, officials said.

The accused allegedly used customer information that a North Korean hacker stole from a private money lender, such as name, security pin number and telephone number, and fooled customers into downloading a spy application developed by the hacker in an attempt to steal more information from them.

They then posed as bank or insurance firm employees and had victims send money to them.

Police said about 200 people have lost about 2 billion won in the scam. 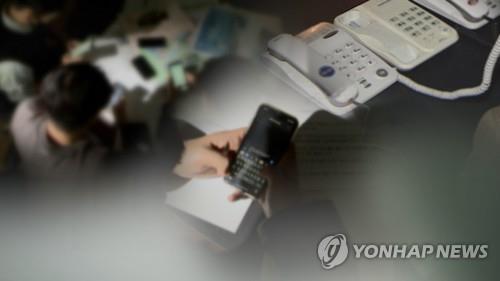 8 members of voice phishing ring arrested amid suspicions of link to N.K. hacker

8 members of voice phishing ring arrested amid suspicions of link to N.K. hacker