SEOUL, Nov. 16 (Yonhap) -- South Korea held a ceremony Monday to mark the repatriation from the United States of the remains of two Korean independence fighters, the veterans affairs ministry said.

The remains of Cho Chong-hee and Na Sung-don arrived at Incheon International Airport, west of Seoul, on Saturday, and the ceremony took place at the airport two days later, as the bereaved family members are required to undergo COVID-19 tests, according to the Ministry of Patriots and Veterans Affairs (MPVA).

Cho and Na took part in various movements for the country's independence from the 1910-1945 Japanese colonial rule, and they were recognized by the state as patriots in 1990, according to the ministry.

The two had stayed in the U.S. and died there earlier this year.

"We will do our best to bring home remains of patriots who passed away in foreign lands," Prime Minister Chung Sye-kyun said during the ceremony, vowing utmost efforts to establish a new, unified Korea to honor their sacrifice and commitment.

They will be buried at the national cemetery in the central city of Daejeon on Tuesday, according to the ministry.

Remains of a total of 141 independence fighters have been brought home from overseas countries. 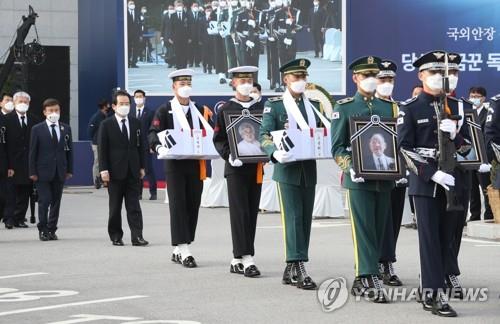