WASHINGTON, Nov. 16 (Yonhap) -- U.S. President-elect Joe Biden on Monday underlined the need for his country to push for a multilateral free trade agreement (FTA), partly to keep China and others from having their way when it comes to global trade.

His remarks came as South Korea and 14 other countries in the Asia-Pacific signed a new FTA, known as the Regional Comprehensive Economic Partnership (RCEP), that, if enacted, would become the world's single-largest free trade pact.

The deal was signed by Australia, China, Japan, New Zealand and all 10 member states of the Association of Southeast Asian Nations. Together with South Korea they make up more than 30 percent of the world's gross domestic product and trade.

"I have talked with a number of these world leaders and I told them, 'Under the law, I am not able to begin to discuss with them'," Biden said when asked if he would consider joining the RCEP. He is set to be inaugurated on Jan. 20. 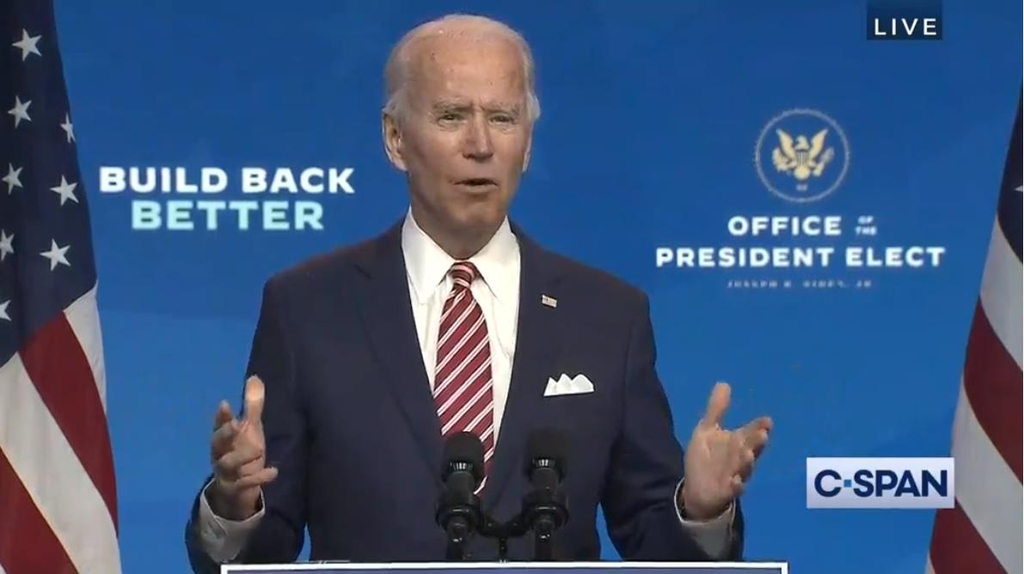 Still, he highlighted the importance of finding U.S. allies in trade.

"We make up 25 percent of the world's trading capacity, of the economy of the world. We need to be aligned with the other democracies, another 25 percent or more, so that we can set the rules of the road, instead of having China and others dictate outcomes because they are the only game in town," he remarked at a press conference in his hometown of Wilmington, Delaware.

The U.S. had long pushed for a multilateral free trade pact, known as the Trans-Pacific Partnership (TPP), that involved Japan and many other U.S. allies in the region, and was designed to counter China and the China-led RCEP.

Seoul too had expressed interest in joining the U.S.-led free trade pact, but the U.S. abruptly quit TPP negotiations in early 2017 at an executive order from President Donald Trump, who then claimed the deal would only be "another disaster" for American workers.

"The idea that we are poking our finger in the eyes of our friends and embracing autocrats makes no sense to me," he said at the press conference.

He stopped short of laying out specific plans, saying he has a "pretty thorough plan" that will be announced on Jan. 21, the day after his scheduled inauguration.

"I promise you I have a pretty thorough plan and I will be prepared to announce that to you on January 21," said Biden.