The value of stocks held by Lee, who died on Oct. 25 after being bedridden following a heart attack in 2014, totaled 20.08 trillion won (US$18.1 billion) as of Monday, according to the data from market researcher Chaebol.com.

It was up about 14 percent from Lee's stock value of 17.6 trillion won at the end of last year.

It also marked the first time for Lee's stock wealth to pass the 20 trillion won level, though he has been South Korea's richest stockholder for the past 10 years. 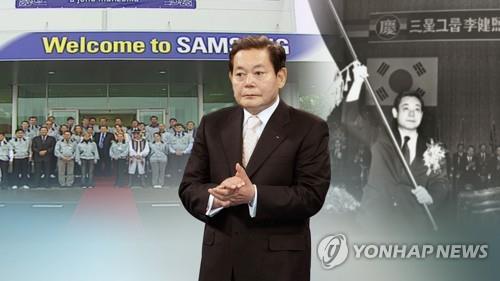 The value of Samsung Electronics shares held by Lee stood at 16.5 trillion won, accounting for more than 80 percent of his stock value. His holdings of Samsung Life Insurance and Samsung C&T shares were worth 2.84 trillion won and 672.7 billion won, respectively.

The jump in Lee's stock value came after shares in the three Samsung units shot up over the past two weeks. Samsung Electronics closed at 66,300 won on Monday, up 17.1 percent from the end of October, with Samsung C&T and Samsung Life Insurance climbing 12.2 percent and 8.3 percent, respectively, over the cited period.

Meanwhile, Lee Jae-yong, the only son of the late Samsung chief and vice chairman of Samsung Electronics, held stocks worth 8.15 trillion won as of Monday, up about 11 percent from end-December.
(END)