SEOUL, Nov. 17 (Yonhap) -- South Korea's Trade Minister Yoo Myung-hee on Tuesday hinted that she may not shelve her bid to become the next director-general of the World Trade Organization (WTO).

Yoo has failed to drum up landslide support from the WTO's member countries to head the global trade body, with her Nigerian rival, Ngozi Okonjo-Iweala, standing ahead in a two-way race.

Asked by a radio host about the possibility of her resignation as a candidate, Yoo did not give a direct answer.

Instead, Yoo told a KBS radio program that the two-way race is in the process of selecting a final candidate throughout consensus building. 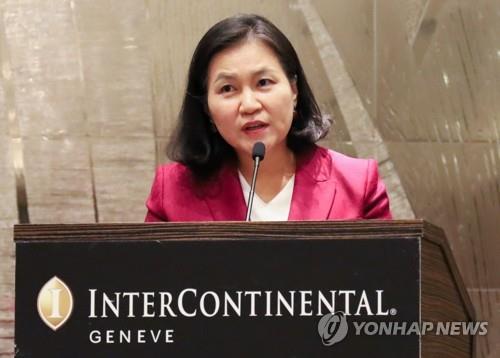 When asked about the possibility that she could take the helm of the WTO, Yoo replied that she "will join the process of consensus-building while making consultations with major nations."

The WTO said Ngozi Okonjo-Iweala has garnered more support from the WTO's 164 member states than Yoo.

The process to pick the new director-general of the WTO is based on consensus among all member states, meaning a single nation could block either Yoo or Okonjo-Iweala.

The WTO had planned to hold a meeting earlier this month to pick a new head, but the meeting was delayed after the United States blocked the favored candidate.
(END)