SK hynix continued its rally on Tuesday after touching a nine-month high on the previous day. It climbed 0.1 percent to 98,100 won (US$88), extending its winning streak to six straight days. 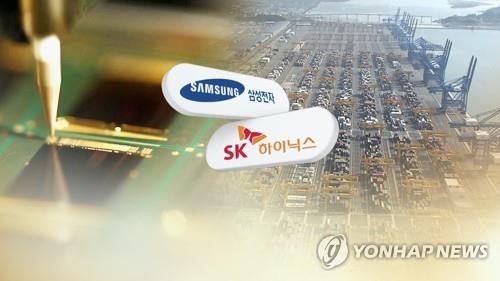 Analysts said foreign investors are buying local semiconductor stocks as they anticipate a big boom in the memory market next year.

Memory chip prices have been falling in recent quarters as server companies adjust their inventory levels, but analysts believe they will rebound next year.

"We expect to see a 'big cycle' in the memory market next year on demand recovery and short supplies," said Choi Do-yeon, an analyst at Shinhan Investment Financial Investment. "There is almost no memory investment in 2020 for the production in 2021."

Analysts said local chipmakers are still undervalued when it comes to share prices and that gives them more room to grow compared to other companies.

According to a report from KB Securities, share prices of the top eight caps on the KOSPI, excluding Samsung and SK hynix, have jumped more than 80 percent on average from the beginning of the year.

But Samsung managed to increase about 20 percent over the period, while SK hynix saw only a 3.5 percent increase from Jan. 2.

"Considering their performance outlook for 2021 and low valuations, this may be a good opportunity for investors to purchase such stocks in the fourth quarter," said Kim Dong-won, an analyst at KB Securities.