SEOUL, Nov. 17 (Yonhap) -- A state committee established to review the feasibility of expanding Gimhae International Airport in southeastern South Korea on Tuesday effectively scrapped the plan, citing safety and environmental issues and a lack of thorough communication with the local government in the decision-making process.

"The new Gimhae airport plan needs substantial supplementation in areas of safety, facility management, demand, environment and noise and as of now remains insufficient in dealing with future changes," said Kim Soo-sam, head of the review committee under the prime minister's office, while delivering a briefing on the committee's findings at the government complex in Seoul.

Launched in December 2019, the committee's survey on the airport expansion project took 11 months.

According to Kim, the committee concluded that the new Gimhae airport project "needs to undergo a fundamental review." 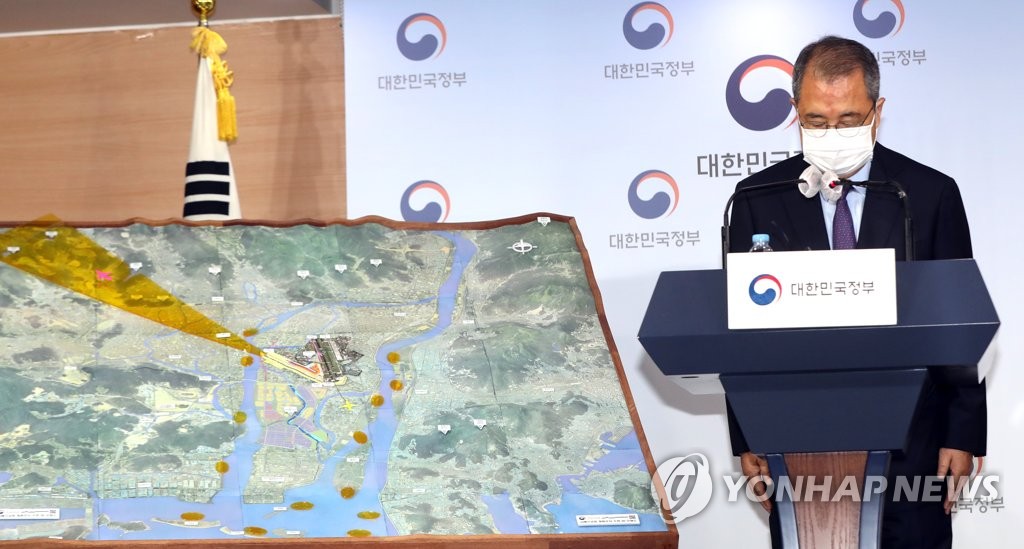 The committee also highlighted insufficient communication between the transportation ministry and the nearby Busan city government, as the building of a new airstrip warranted the need to demolish part of a nearby mountain in the area.

"As an international airport project that requires the capacity to adjust to future changes, the project had a very tight basic plan," the committee concluded.

The plan was first announced in June 2016 during the previous administration under former President Park Geun-hye in light of the growing demand for air transportation in the southeastern region.

Daegu and the surrounding North Gyeongsang Province had advocated for Miryang, citing its easier accessibility and sufficient demand, whereas Busan's residents demanded the new airport be built on Gadeok Island within the port city.

In light of the committee's recommendation to abandon the Gimhae project, the ruling Democratic Party (DP) is moving toward pushing to construct a new airport on Busan's Gadeok Island. The DP is reportedly preparing to introduce a special bill for the plan.

"If the Gimhae project is scrapped, there is essentially no other feasible candidate besides Gadeok Island. We intend to reduce the project schedule as much possible," a key DP insider said while asking for anonymity.

Kim Chong-in, the interim head of the main opposition People's Power Party, said it was "regrettable" that the government's policy was inconsistent but also stated that a new project on Gadeok Island had to be seriously considered.

The Busan city government also welcomed the committee's findings against the central government's Gimhae project. The city demanded that a new airport on Gadeok Island "has to be constructed as soon as possible" to boost its bid to host the 2030 World Expo.