(ATTN: CORRECTS headline, lead, throughout to clarify that former officer, not incumbent officer, was sentenced to prison per defense ministry's correction)

SEOUL, Nov. 17 (Yonhap) -- A former Navy officer was sentenced to a year and a half in prison on Tuesday for leaking confidential information related to a project to build a next-generation destroyer, the defense ministry said.

A general military court under the ministry said the former officer is guilty of leaking to defense company officials classified information related to the Korea Destroyer Next Generation (KDDX) project to build a 6,000 ton-class Aegis destroyer while in active service, according to the ministry.

The defendant, along with other officials, was indicted over allegations of having allowed Hyundai Heavy Industries Co. officials to secretly film confidential documents related to the project in 2014.

Yet the court acquitted an incumbent officer of similar charges, citing a lack of evidence. 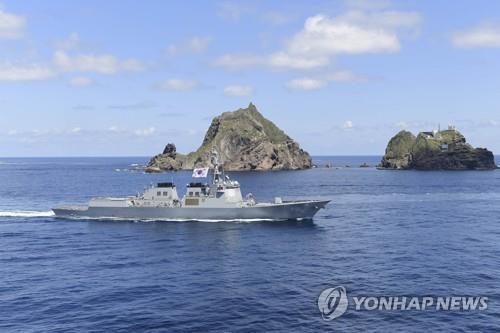 Despite the info leak controversy, the country's arms procurement agency said last month it will pick Hyundai as a preferred bidder for the project.

Daewoo Shipbuilding & Marine Engineering Co., which is also vying for the 21 billion-won (US$17.6 million) project, filed for a court injunction, but a Seoul court dismissed the application, saying it is unclear if Hyundai actually used the information that it illegally acquired.

"We will do our best to continue the project without a hitch in accordance with due procedures and regulations," an agency official earlier said.

South Korea plans to complete the design of the destroyer by the second half of 2023 and begin its construction in 2024.

On the same day, another Navy officer was sentenced to 18 months in prison for leaking confidential information related to a submarine project.

Two other civilians were sentenced to three years in prison, suspended for five years each, for leaking confidential information related to other arms procurement businesses. The court said it took into consideration that they didn't get any financial rewards for their acts.