SEOUL, Nov. 17 (Yonhap) -- The top U.S. general in South Korea on Tuesday met with several South Korean lawmakers during their rare visit to the headquarters of U.S. Forces Korea, the U.S. military said.

Gen. Robert Abrams, commander of U.S. Forces Korea, had roundtable discussions with members of the parliamentary defense committee on how to deepen the alliance between the two countries, according to the U.S. military.

Abrams emphasized the importance of the alliance and maintenance of a strong combined defense posture to ensure peace, security and stability on the Korean Peninsula, it said.

"Today's engagements confirmed to the National Assembly that we stand postured and ready to deter aggression, defend the Republic of Korea, and if necessary, defeat any adversary who would oppose us," Abrams said, using South Korea's official name, during a meeting at Camp Humphreys in Pyeongtaek, some 70 kilometers south of Seoul.

The lawmakers also toured the U.S. Army's largest overseas installation and had a luncheon with service members, the U.S. military said.

The U.S. stations some 28,000 troops in South Korea to deter North Korean aggression, a legacy of the 1950-53 Korean War that ended in an armistice, not a peace treaty. 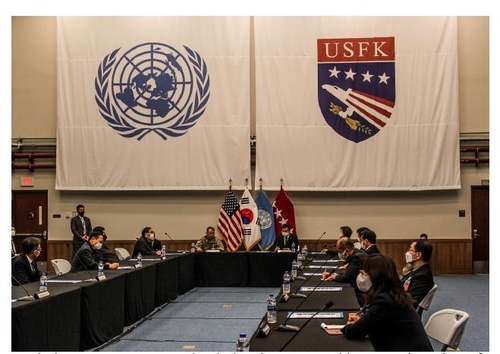