The TPP was signed by 12 countries, including the U.S., in February 2016, but the U.S. withdrew from the trade agreement on Jan. 23, 2017, three days after President Donald Trump took office.

"Ultimately, we want to see it denuclearize North Korea, and I still believe it's possible. I think one of the mistakes that was made was not pursuing the Trans-Pacific Partnership, TPP," said Matt Salmon, a former Republican member of the House of Representatives from Arizona.

The former congressman noted the TPP may have been viewed only as a trade deal, but insisted it would have brought much more to the U.S. had the country stayed with the agreement. 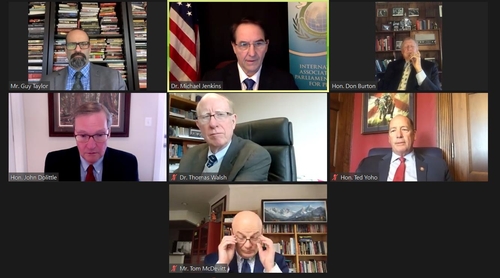 "The countries of the Asia Pacific that were partners in the TPP initiative, the TPP agreement, viewed that as far more than just a trade agreement," he told a webinar hosted by the Washington Times Foundation and sponsored by the International Association of Parliamentarians for Peace.

"It was a commitment to solidarity, and I think that it ultimately would have led to a lot more than just a trade agreement as far as cooperation between those countries like Japan, like Vietnam and others in the region that really could have contained China," he added.

The remarks came after South Korea and 14 other countries, including China and Japan, signed a new regional trade agreement, known as the Regional Comprehensive Economic Partnership (RCEP), that if enacted will become the world's single-largest free trade pact, representing more than 30 percent of global population and trade.

Rep. Ted Yoho (R-Florida) agreed the U.S. may have "missed" an opportunity by withdrawing from the TPP.

"I disagreed with you on TPP when I first came into Congress, but my thinking has changed. I think that was a missed opportunity in lieu that China and the 15 nations just signed RCEP, which ... includes 2.2 billion people, and which is about 30 percent of the world's population, and we're not in that deal," he told the virtual seminar.

"This is, I think, a missed opportunity by our nation that we could come together to show that unification, and to continue what we have always stood for in this country, and that is freedom and liberty and constitutional republic where we have run by a democratic process that the western worlds have taken and that is where the peace has come out of," added Yoho. 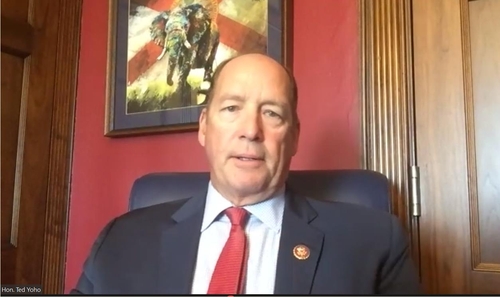 Both Salmon and Yoho argued that increased pressure on China may also help denuclearize North Korea.

"We have got to really double down our pressure on China. I don't mean pressure in trying to embarrass them publicly, but diplomatic conversations that need to erupt again in a strong way with Chinese about the North Korean issue," said Salmon.

"There are several obstacles that have to be overcome" for peaceful unification of South and North Korea, said Yoho. "And those are denuclearization. That has to be defined to where Kim Jong-un accepts it and the other members accept, and China plays a very large role in that knowing that they provide about 90 percent of the trade with North Korea."

Such a sentiment has also been shared by U.S. President-elect Joe Biden.

"We make up 25 percent of the world's trading capacity, of the economy of the world. We need to be aligned with the other democracies, another 25 percent or more, so that we can set the rules of the road, instead of having China and others dictate outcomes because they are the only game in town," Biden told a press conference on Monday.

The U.S. congressman also highlighted the importance of multilateral cooperation between South Korea, Japan and the United States for denuclearization and unification of the Korean Peninsula.

"When I look at ROK, Japan and the United States, that's probably our largest and strongest alliance outside of NATO," Yoho said, referring to South Korea by its official name, the Republic of Korea.

"And if we show fissures in that -- whether it's between us and South Korea with the SMA, or if it's with us and Japan over trade deals or South Korea and Japan -- it weakens that and it empowers North Korea. It empowers China, and maybe some influence from Russia," he added.

South Korea and the United States are currently deadlocked in Special Measures Agreement (SMA) negotiations to set South Korea's share of the cost in maintaining some 28,500 American troops on the peninsula.