SEOUL, Nov. 19 (Yonhap) -- South Korea will wrap up this year's war remains excavation work at a former battlefield on the border with North Korea, the defense ministry said Thursday, with Pyongyang remaining unresponsive to calls to work together as agreed.

Under a military tension reduction accord signed Sept. 19, 2018, South and North Korea agreed to launch a joint project to retrieve remains of soldiers killed during the 1950-53 Korean War from Arrowhead Ridge, one of the fiercest battlefields inside the Demilitarized Zone separating the two sides.

But the South carried out the work alone since last year as the North has stonewalled calls for joint work. Excavation work is carried out usually between April and November, and this year's work is scheduled to end Friday.

Over the seven-month period from April, the military found 330 bone pieces believed to have belonged to 143 troops killed in the war, according to the ministry. Of them, 67 sets of remains are presumed to be of Koreans, while 64 others are believed to belong to Chinese troops.

The military also found a total 17,598 articles that belonged to the deceased soldiers, including badges, U.S. bulletproof jackets and Chinese gas masks, the ministry said.

This year, South Korea identified six soldiers killed in the war from the remains recovered from the former battlefield, in addition to three identified last year.

The ministry said South Korea will resume the work next year to bring back home the war dead who remain buried inside the DMZ, and continue efforts to encourage the North to take part in the project. 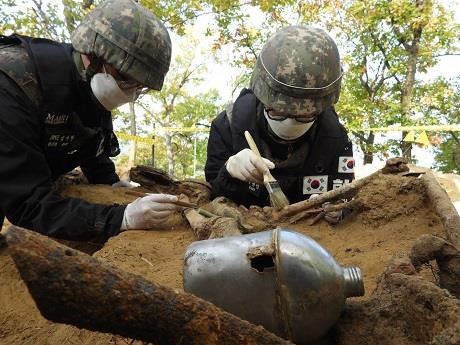 S. Korea to wrap up this year's war remains excavation work inside DMZ

S. Korea to wrap up this year's war remains excavation work inside DMZ