According to the Korea Meteorological Administration (KMA), 68.2 millimeters of rain fell in Seoul as of 8 a.m., surpassing November's previous daily record of 67.4 mm set on Nov. 7, 1916. It is the heaviest daily precipitation recorded in the capital during the month of November since modern weather observation began here in 1907. 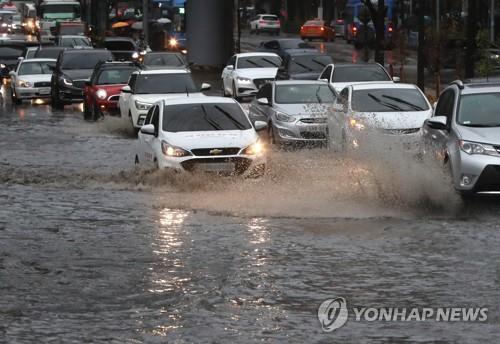 Precipitation is forecast to further increase for the rest of the day, as Seoul and central regions, including parts of Gangwon and South Chungcheong provinces, are being hit by strong rain of about 20 mm per hour, accompanied by thunder and lightning, the KMA said.

For the rest of the nation, the rainfall amounted to around 5 mm, it added.

"The humid and warm air created by the low atmospheric pressure clashed with cold air coming from the northwest, resulting in heavy rainfall," a KMA official explained, adding the rain belt is to move toward the southern regions in the afternoon.

Despite the unusually heavy rain, Seoul's morning low was 17.1 C, the highest on record for November, the KMA said, noting the previous high was 16.4 C recorded on Nov. 5, 2011.

After the rain stops later in the day, however, temperatures will dive by more than 15 C in the central and southern regions on Friday, the agency predicted.

Seoul soaked by heaviest daily rainfall on record for November

Seoul soaked by heaviest daily rainfall on record for November