SEOUL, Nov. 19 (Yonhap) -- One soldier and an airman have tested positive for the new coronavirus, the latest in a series of infections reported recently at barracks, the defense ministry said Thursday.

The airman in the central city of Seosan showed symptoms while being quarantined after his unit reported a cluster infection recently, according to the ministry. The total number of COVID-19 cases at the Air Force unit came to 12.

The soldier stationed in the border town of Paju was confirmed to have been infected after coming into contact with a colleague who earlier tested positive, the ministry said.

"The authorities are conducting virus tests for all members of the Paju unit," a ministry official said.

The latest cases brought the total number of confirmed cases among the military population to 206.

The number has been on the rise since last week following an infection cluster at the military's Welfare Agency. Cluster infections continue at military units across the country.

Currently, 1,231 service members are in isolation in accordance with the health authorities' guidelines, and the military has quarantined an additional 1,745 people under stricter antivirus schemes of its own as a preventive step.

Nationwide, the country added 343 more COVID-19 cases, including 293 local infections, raising the total caseload to 29,654, according to the Korea Disease Control and Prevention Agency (KDCA). 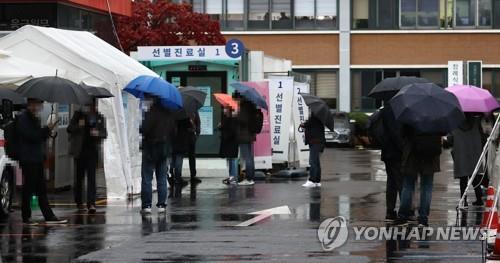