SEOUL, Nov. 19 (Yonhap) -- The ruling party said Thursday it will push for a law revision to hasten the launch of a special investigative body dealing with corruption among high-ranking government officials, after a round of bipartisan efforts for the launch failed to make progress.

A seven-member committee entrusted with designating two final candidates to lead the envisioned body, the Corruption Investigation Office for High-ranking Officials (CIO), again failed to agree on the nominations in its third meeting Wednesday.

Consisting of representatives from the ruling Democratic Party (DP), the main opposition People Power Party (PPP) and the legal sector, the committee was to come up with the two candidates for the president to appoint one, but it was unable to make progress due largely to fierce discord between the members of the PPP side and the rest.

The introduction of the CIO with the authority to prosecute cases, a right currently exclusive to the state prosecution service, is at the core of President Moon Jae-in's push for the reform of the country's key law enforcement bodies, especially the prosecution.

The DP accused the PPP side of stonewalling the committee. Holding 174 seats on the 300-member National Assembly, the ruling party plans to go at it alone and revise the related law, with the aim of having the investigative unit officially set sail by this year.

"No matter what happens, (DP) will set the CIO into operation within this year," DP floor leader Rep. Kim Tae-nyeon said in a party policy coordination meeting. "The party is being forced to make a grave decision; it will embark on the revision of the law on the CIO in earnest," he added.

According to DP officials, the party plans to push the envisioned law revision during a plenary parliamentary session set for Dec. 2 and onward, so that the bar on nominating the candidates for the inaugural CIO leadership will be eased. 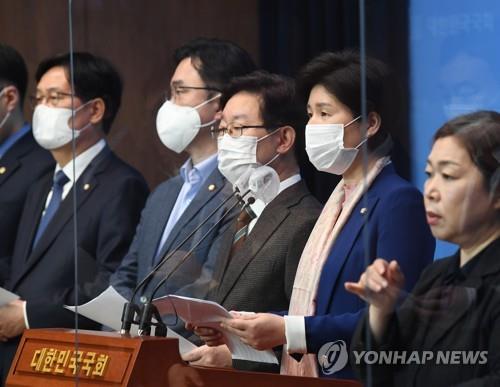 Under the current law on the CIO, consent from at least six of the seven recommendation committee members is required to officially nominate a candidate. This setting gives veto power to the DP or PPP, both holding two representatives on the committee.

The main opposition party condemned the ruling party, calling its move "destruction of the rule of law."