WASHINGTON, Nov. 19 (Yonhap) -- The United States needs to be more strategic when dealing with North Korea but move as quickly as possible to help denuclearize the communist state and reunify the divided Koreas, a U.S. lawmaker said Thursday.

The remarks from Rep. Tom Suozzi (D-NY) came one day after the House of Representatives unanimously adopted a resolution, submitted by Suozzi in April, highlighting the importance of the South Korea-U.S. alliance and urging U.S. efforts to further strengthen it.

"I think that the world is watching what the priorities of the United States government are going to be," the congressman said, noting the U.S. will soon enter into a new administration.

Democratic candidate Joe Biden has been declared the projected winner of the Nov. 3 presidential election, and is set to be inaugurated on Jan. 20.

"And we sent a very clear message yesterday, a bipartisan message, Democrats and Republicans together, that the relationship between the United States of American and South Korea is one of the most important relationships in the world," Suozzi said in a ceremony marking the passage of the resolution. 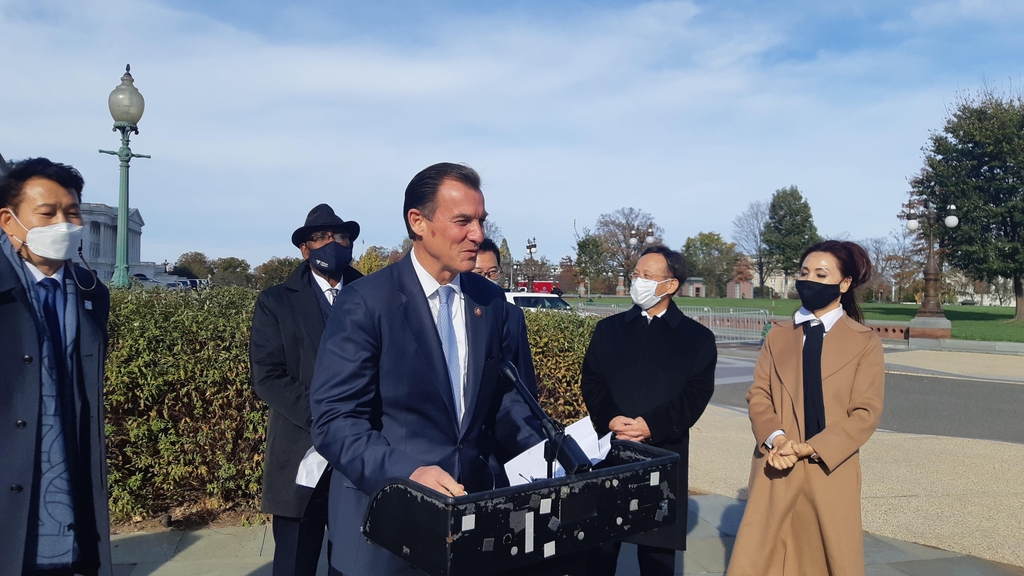 On Wednesday, the U.S. House simultaneously passed two resolutions, including one submitted by Rep. Ami Bera (D-CA) in June, that also highlighted the importance of the South Korea-U.S. alliance.

Suozzi noted the timing could not have been better, though it had not been orchestrated.

Biden has repeatedly said he will treat U.S. allies differently and better than President Donald Trump has treated them.

Biden's election, however, also comes with some concerns that the former vice president of Barack Obama may return to the Obama administration's "strategic patience" in dealing with North Korea, which many believe had achieved little while allowing the communist state to further its nuclear and other weapons programs.

Suozzi noted some people, such as many Koreans that remain separated from their loved ones since the end of the 1950-53 Korean War, could no longer afford to be patient.

"I understand where that comes from, but I think that some people can't be patient anymore because (of) these families that we are worried about, and we are worried about the threat of North Korea always. So we'd like to move as quickly as possible," he said. "So we need to be more strategic. Maybe a little less patient."

"I know how important reunification is. I know how so many families that are elderly people haven't seen their families and they are not going to live much longer," he added.

The U.S. lawmaker also underlined the need for the next U.S. administration to work with, or at least recognize, China as a "big player" in North Korean issues.

"Because I think they have tremendous influence over North Korea and they are the big players here as to what the long-term relationship will be like," he said.

U.S. needs to be more strategic but less patient in dealing with N. Korea; lawmaker

U.S. needs to be more strategic but less patient in dealing with N. Korea; lawmaker