SEOUL, Nov. 20 (Yonhap) -- Prime Minister Chung Sye-kyun on Friday asked the public to refrain from holding year-end social gatherings and nonessential outdoor activities, as South Korea braces for another potential wave of the pandemic, with rising sporadic cluster infections in a number of parts of the nation.

In a televised statement, he said the country's antivirus fight is "facing a crisis."

He appealed to the people to "refrain from holding any scheduled year-end gatherings as much as possible and stay at home if not for essential activities," Chung said.

In particular, he asked those in their 60s and older to "minimize unnecessary outings and meetings" during the winter season.

Chung's comments came as South Korea was grappling with a new wave of sporadic COVID-19 cluster infections across the nation, with new daily reported cases hovering above 300 for three straight days.

To prevent another wave of virus infections, the country decided to enforce tightened virus prevention measures Thursday for the next two weeks in the greater Seoul area and southern city of Gwangju by raising the social distancing level by one notch to Level 1.5 under a new five-tier scheme.

Chung asked relatively younger workers to "either postpone or cancel year-end and after-work gatherings" and that companies participate in the government's social distancing program by facilitating remote work. 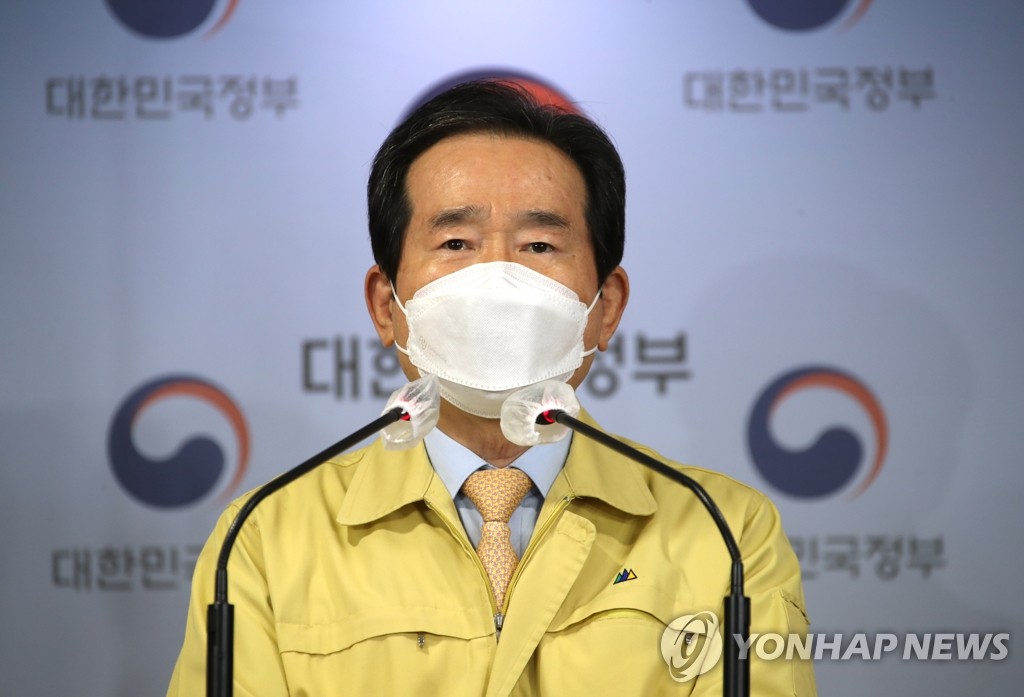 He pointed out that the positivity rate of those in their 40s who were tested in the past week stood at 52.2 percent, up 10 percentage points from the previous week.

"The scope and speed of transmissions among the younger population, who often go about symptom-free, isn't easy to catch up with," he noted.

"The government will do its utmost to allow all test-takers a safe environment for them to take the exam in a fair manner," he said

The education ministry announced Thursday that it will closely monitor cram schools and other business establishments used by young students to see whether they operate under strict antivirus measures until the end of the CSAT slated for Dec. 3. More than 490,000 high school students and others plan to take the exam simultaneously at designated places across the country.

The Seoul metropolitan government expressed alarm at the sudden increase in new infections in the city, with 132 cases added on Thursday alone.

"The situation is becoming more and more serious, and we are watching it closely," Park Yoo-mi, a disease control official at the city government, said during a virtual press briefing.

"We believe this is a huge inflection point that we haven't experienced before when it comes to controlling an infectious disease," Park added.

Thursday's tally marked the highest number of daily cases for the capital since Aug. 27, bringing the number of total accumulated cases in the city to 7,236, a new high among the nation's 17 metropolitan cities and provinces.

The previous record was held by Daegu, the epicenter of the virus outbreak in the spring, with 7,211 cases.

"It won't suddenly go down from here. It will go up," Park said.