The service marking the fifth anniversary of his death will be held at 2 p.m. at Seoul National Cemetery in the southern Dongjak Ward.

The event is expected to bring together high-profile politicians, including Prime Minister Chung Sye-kyun and National Assembly Speaker Park Byeong-seug.

The commemoration ceremony will be followed by the opening of a public library named after the former president, in the Dongjak district. The Kim Young Sam President Memorial Library is scheduled to officially reopen after undergoing major renovation work.

As one of the most powerful political rivals to the country's authoritarian leaders, Park Chung-hee and Chun Doo-hwan, Kim's presidency helped the country peacefully move from the decades of military juntas to a civilian regime.

In his final years as president, South Korea became severely engulfed by the 1997 Asian financial crisis, which forced the country to receive a massive international bailout from the International Monetary Fund. 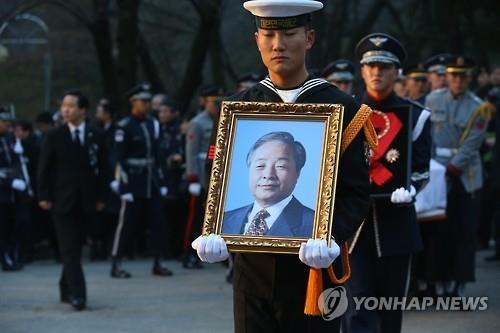