The committee gave its nod to the bill to revise the Military Service Act to grant an exceptional right to defer military duties of acclaimed pop artists, such as BTS, who are recognized to have contributed to the elevation of the country's global reputation.

The bill must pass parliament's plenary session for final approval.

The revision was proposed by Rep. Jeon Yong-gi of the ruling Democratic Party in September after BTS became the first South Korean pop artist to reach No. 1 on the U.S. Billboard Hot 100 with its song "Dynamite."

"BTS members will be able to put off their enlistments until the age of 30 if this bill passes through a plenary session and a related enforcement decree is revised as well," the lawmaker said.

Under the current military law, BTS's eldest member Jin, born in 1992, is subject to enlistment by the end of the year. All able-bodied South Korean men between the ages of 18 and 28 are ordered to serve in the military for about two years for national defense against North Korea.

Military service exceptions or deferrals have been only given to international award-winning athletes and classical musicians in recognition of their roles in promoting the country's reputation overseas under the existing law.

The parliamentary committee gave its nod to the government's request to extend the overseas deployments of the anti-piracy Cheonghae unit in Somalia and the Akh special forces unit in the UAE until the end of 2021.

South Korea has deployed its 300-member Cheonghae unit off the coast of Somalia since 2009 as part of its contribution to global efforts to tackle rampant piracy in the region. The areas of its mission cover the Gulf of Aden and the Strait of Hormuz.

The 150-team Akh unit has been helping train special forces in the UAE since 2011.

The overseas deployments have been renewed each year via parliamentary approval. The extensions have to be approved through plenary sessions by the National Assembly for final approval. 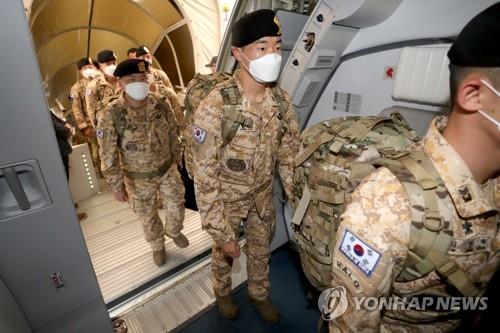