Ruling against the prosecution auctioning off Chun's residence in Seoul's Yeonhui neighborhood last year to collect his unpaid penalties, the Seoul High Court said the property's main house and garden should not be subject to seizure, as they are not related to his illegalities cited by the top court. 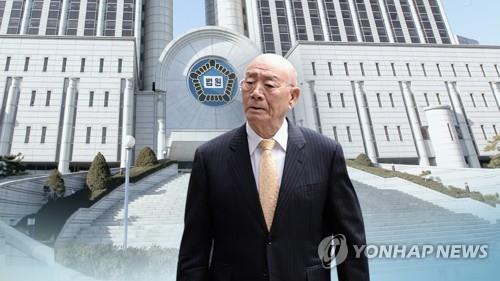 The court, however, said an annex of the residence can be seized, viewing it as an illicit asset.

The ruling came after Chun's residence was sold in an auction in March 2019 at the request of the Seoul Central District Prosecutors Office, and the former president launched an administrative suit calling for the nullification of the public sale.

Chun claimed in the suit that it is illegal to auction and seize his residence because it is owned in the name of his wife Lee Sun-ja and other family members.

The 89-year-old Chun, a former Army general, seized power in a 1979 coup and served as president from 1980 to 1988. He has been deprived of privileges as a former president due to his criminal punishment on treason and bribery charges and ordered by the top court in 1997 to forfeit more than 220 billion won (US$197 million) for amassing slush funds. Refusing to pay the bulk of his forfeit, Chun made a well-known comment in a court hearing in 2003 that he had only 290,000 won.

Chun's residence was auctioned off last year for a price of about 5.14 billion won, but the buyer was not revealed.

The Seoul High Court said there is insufficient evidence to prove the main house and garden of Chun's residence were acquired illegally, though it has been confirmed that the annex owned by one of his daughters-in-law was bought with his slush funds.