Also in attendance were leaders of rival parties, Rep. Kim Tae-nyeon, the floor leader of the ruling Democratic Party, as well as Kim Chong-in and Rep. Joo Ho-young, the interim chief and floor leader of the main opposition People Power Party, respectively.

President Moon Jae-in sent a wreath of flowers to pay his respects. 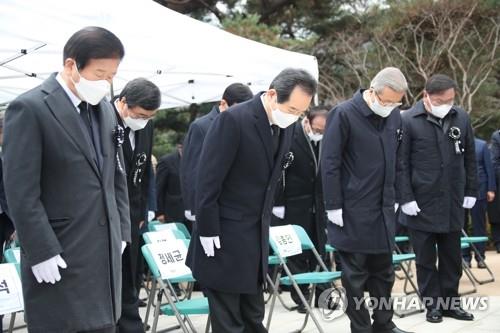 The late president's "last words were about integration and reconciliation," Park said, emphasizing that South Korean politicians today need to "stop the politics of conflict and disintegration."

The prime minister said during the service that the government will move first to uphold the former president's will of "integration and tolerance" and bring reforms and changes.

The memorial service was followed by the reopening ceremony of the Kim Young Sam President Memorial Library, a public library named after the former president, which went through two years of renovation.

As one of the most powerful political rivals to the country's authoritarian leaders, Park Chung-hee and Chun Doo-hwan, Kim's presidency helped the country peacefully move from the decades of military juntas to a civilian regime.

In his final years as president, South Korea became severely engulfed by the 1997 Asian financial crisis, which forced the country to receive a massive international bailout from the International Monetary Fund.